An FBI official said Tuesday the agency has opened a domestic terrorism investigation into the July 28 shooting at the Gilroy Garlic Festival where a gunman killed three people including a 6-year-old, a 13-year-old and a 25-year-old and injured several others before dying of a self-inflicted gunshot. Photo by Terry Schmitt/UPI | License Photo

Aug. 6 (UPI) -- An official said Tuesday that the FBI started a domestic terrorism investigation into a California festival shooting that killed three people more than a week ago.

John Bennett of the FBI San Francisco field office said at a press conference that the probe was based on the discovery of a target list by the gunman, Santino William Legan, 19.

The gunman killed 6-year-old Stephen Romero, 13-year-old Keyla Salazar and 25-year-old Trevor Irby, and injured several others July 28 at a garlic festival in Gilroy, 30 miles southeast of San Jose. Police stopped the shooting by opening fire on Legan, who then killed himself.

"Due to the discovery of the target list, as well as other information we have encountered in this investigation, the FBI has opened a full domestic terrorism investigation into this mass shooting," Bennett told reporters. "We have not made a final investigative conclusion into motive of the shooter. However, we have uncovered evidence throughout the course of our investigation that the shooter was exploring violent ideologies."

Bennett added that several people have asked why the domestic terrorism investigation wasn't opened sooner amid reports of white supremacist and anti-Semitic propaganda tied to his social media account and anti-Islam literature and supplies for a large-scale attack found in his Nevada home.

"Having a belief system and also committing an act of violence does not necessarily make that an act of terrorism nor does it give a clear motive," Bennett said. "We have to determine that individual's ideology caused them to commit the act of violence in furtherance of their political and social goals."

Investigators are interviewing Legan's relatives and associates, and reviewing digital media and materials seized from his residence, including several hard drives, a computer tower, books and a letter from a relative, a receipt of a search warrant released by Nevada authorities shows.

"We are still working to determine the motive in this crime," Bennett said. "However, due to the information we have found thus far, the FBI has opened a full domestic terrorism investigation."

Bennett said among the targets nationwide were religious institutions, federal buildings, courthouses, and political organizations from both major political parties, and the Gilroy Garlic Festival.

Even though the threat "has been mitigated" by the suspect's death, Bennett said the FBI still has the responsibility to notify those on the list of the potential threat.

Out of respect for their privacy and safety, Bennett did not identify the names of those on the list.

U.S. News // 9 hours ago
COVID-19 rules enforced, Oval Office redesigned as Biden moves in to White House
Jan. 20 (UPI) -- The incoming Biden administration is making changes to how business as usual will be conducted in the White House, including enforcing stricter COVID-19 regulations compared to its Trump administration predecessor. 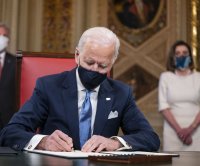 U.S. News // 23 hours ago
Biden signs executive orders on COVID-19, climate change, DACA
Jan. 20 (UPI) -- As one of his first acts as president, Joe Biden on Wednesday signed a flurry of executive orders that will set the tone for his new administration.