Purely CBD, which is based in Texas, saw its first store in Florida open recently in Daytona Beach.The company is technically not a franchise operation but licenses its brand and sells it products to local entrepreneurs.

"We chose Daytona Beach because there aren't many retail locations," the new store's co-owner Sam Tortorice, 34 told UPI. "We tried in another city first but local officials there indicated they didn't allow it."

The company had a booth at the USA CBD Expo Saturday. Manufacturers and distributors displayed a huge variety of products that you can eat, drink, smoke or rub on you that are infused with CBD or hemp. There were brownies, gummies, coffee, sparkling water, energy drinks, salves and ointments. Much of it was being handed out for free.

CBD is a non-intoxicating compound derived from hemp, a cousin to marijuana. The last hurdles to hemp production were cleared away by the 2018 Farm Bill, which has led to rapid expansion of the hemp and CBD industries. States like Colorado and Kentucky, however, ramped up earlier.

Tortorice opened his 1,200-square-foot store in early April. Tortorice said he's about to sign a lease on another location in Lake Mary, Fla. just north of Orlando. He formerly owned a pressure-washing business.

"My mother actually uses CBD, and she would ask me to get it for her because she didn't want to go to the smoke shop," Tortorice said. "Purely CBD offers a store concept that doesn't look like a vape shop or head shop; its a warm, friendly boutique."

A Florida-based chain, Your CBD Store, advertises 64 locations in Florida and now says it has 300 stores nationwide.

Another Florida businessman getting into the market was Jeff Ludy of Tampa, who recently started a CBD coffee company Cold Fire Roasters.

"Coffee is the perfect way to get CBD. You get the same amount, 10 mg per cup, so you can get it regularly every day," Ludy told UPI.

He works with one supplier who grows hemp in Kentucky and also processes the crop.

"I'd just say that everybody has to do their due diligence regarding suppliers. It's a new industry with a lot of new players," he said.

Valley High Genetics was skipping the middleman at the expo; the company sold hemp plants directly to the public.

"We grow but we also create different strains which have different flavors," said Kilby Williamson, chief financial officer. Three of the varieties on the table at Valley High were named Trump, Stormy Daniels and Putin's Poison.

U.S. News // 12 hours ago
U.S. markets fall amid continued volatility, mixed quarterly earnings reports
Jan. 27 (UPI) -- U.S. markets closed the day with losses after posting gains earlier in the session with all three major indexes down for the week. 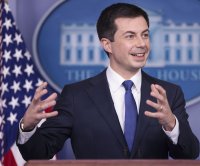