In a speech Monday to the Veterans of Foreign Wars in Florida, Pompeo announced the sanctions against Chinese firm Zhuhai Zhenrong and its CEO, Youmin li. The United States has long said it would impose and enforce any sanction at its disposal against the Iranian regime.

"We can't tolerate more money going to the Ayatollah putting American soldiers, sailors, airmen and Marines and putting their life at risk," he said, referring to Iranian leader Ali Khamenei. "It's too important."

In a statement, Pompeo said the company knowingly made a significant purchase of crude oil from Iran on May 2, and the sanctions will block the company from U.S. banking or property transactions.

"The United States is taking further action as part of our maximum economic pressure campaign against the Iranian regime," he said.

The sanctions come amid rising tensions between Iran and the United State that began in May, when Tehran partly pulled out of the 2015 nuclear accord. On Monday, President Donald Trump dismissed Iranian claims of arresting members of a spy ring linked to the CIA. Tehran said it detained 17 Iranian-born agents, some of whom were sentenced to death. President Donald Trump called the claims "totally false." 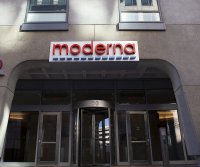 U.S. News // 1 hour ago
Moderna to seek FDA approval for COVID-19 vaccine
Nov. 30 (UPI) -- U.S. biotech firm Moderna said Monday it will seek an emergency use authorization from U.S. regulators for its COVID-19 vaccine candidate after further clinical trials confirmed it is 94% effective.