Despite the growing global population, the United Nation predicts food production will outpace demand over the next 10 years, causing prices to fall. File Photo by  Stephen Shaver/UPI | License Photo

EVANSVILLE, Ind., July 10 (UPI) -- Global prices for many agricultural products are expected to fall over the next decade, even as a growing population rapidly increases demand for food, the United Nations predicts.

A report released this week by the U.N.'s Food and Agriculture Organization and the 36-member-nation Organisation for Economic Co-operation and Development envisions that demand for food will increase some 15 percent over the next 10 years, as the world's population grows and more people escape poverty.

But agricultural production is expected to increase even faster.

"Yield improvements and higher production intensity, driven by technological innovation, will result in higher output, even as global agricultural land use remains broadly constant," the economic organizations said in a statement.

This is good news for low-income people, the report said. But it means a difficult decade could lie ahead for many of the world's farmers -- including those in the United States.

"Prices right now haven't been all that remunerative to producers anyway," said Jack Scoville, a market analyst for The PRICE Futures Group in Chicago. "Having prices stay weak adds hardship."

As a net exporter of agricultural goods, the United States is highly dependent on foreign markets, Scoville added. And global prices often are American prices.

"We tend to set the prices," he said. "What we're willing to sell at often ends up as the [global] price."

Despite the grim outlook, American industry groups were slow to believe all of the report's conclusions. Agricultural prices are notoriously difficult to predict because they are so volatile. Weather events, trade disputes, war and disease can have major impacts on food supply and demand -- and thus price. Most of those events cannot be predicted.

"Things can happen so quickly that by the time they've done the analysis, they're already behind," said Michael Nepueux, an economist with the American Farm Bureau Federation.

African swine fever's spread through China is a timely example, Nepueux said. The most recent estimates indicate China has lost 20 to 30 percent of its herd to the incurable disease -- which is a greater number of animals than the entire American herd.

Just a few months ago, few economists thought the disease would have such a devastating impact, Nepueux said.

"That will restructure global protein flows for years to come," Nepueux said. "I don't see that reflected in this report."

However, barring any major trade or production disruptions, the report's general conclusions are believable, Nepueux said.

Agriculture in the United States and around the world has steadily become more productive. Each year, advances in crop science and technology increase yields and grow animals fatter and faster.

"It is crazy," Nepueux said. "Since about 1960, if you plot yields on a graph, you have this gorgeous straight line going up year after year."

The United States produces more food than it can consume, which means that commodities must be exported to maintain their prices.

"I will say we are vulnerable because we have such large supplies and we rely on trade," said Kevin Good, the vice president of industry relations at Cattle Fax, a beef cattle information and analysis service.

U.S. News // 54 minutes ago
Gallup: Projected holiday spending ticks up, but far off 2019 season
Nov. 25 (UPI) -- Americans over the past month have increased the amount of money they expect to spend on holiday shopping this year, Gallup said in a survey Wednesday. 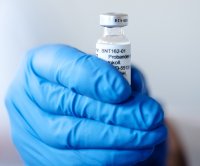 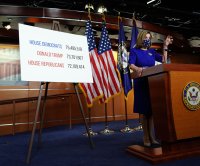 U.S. News // 7 hours ago
Republican group sues to block Wisconsin vote certification
Nov. 25 (UPI) -- Republicans in Wisconsin have filed a lawsuit asking the state's Supreme Court to block the certification of election results claiming that tens of thousands of illegal ballots were cast.

U.S. News // 10 hours ago
Lawsuit: CBP held dozens of minors for several days in the last 2 months
Nov. 24 (UPI) -- A new lawsuit accuses U.S. Customs and Border Protection of detaining dozens of children, including infants, at southern border facilities for longer than 72 hours, and some for as long as 18 days.

U.S. News // 14 hours ago
Man convicted for murder of Texas couple seeks stay of execution
Nov. 24 (UPI) -- Lawyers for a Texas man convicted of killing a married couple asked a federal judge Tuesday for a stay of his execution, citing evidence allegedly suppressed during his trial two decades ago.