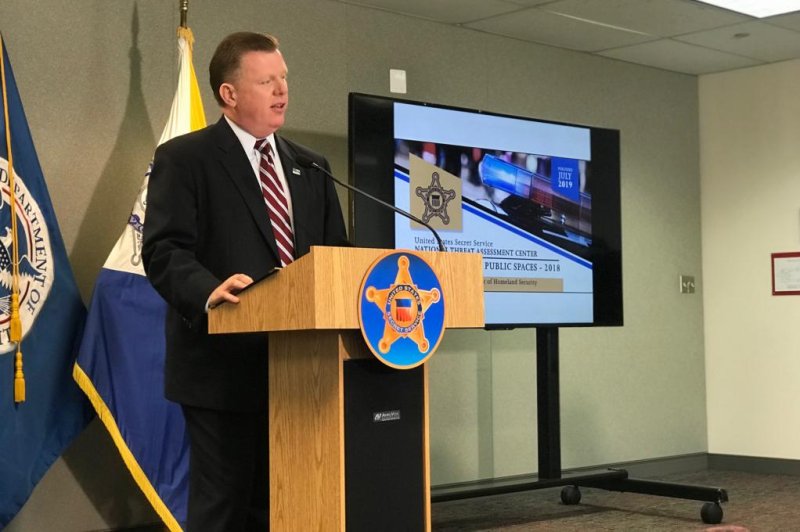 ALEXANDRIA, Va., July 9 (UPI) -- Most of the people who carried out mass attacks in public spaces last year had made threatening communications, and 75 percent of those communications had aroused concern in others, the Secret Service's National Threat Assessment Center said Tuesday.

The center's assessment of 27 mass attacks in public places, including shootings at Marjory Stoneman Douglas High School in Parkland, Fla., and Chabad of Poway synagogue California, found that two-thirds of the attackers had "a history with mental health challenges," Secret Service Director James M. Murray said at a conference to review the findings.

The mental health symptoms were related to depression and psychotic symptoms such as paranoia, hallucinations, or delusions, the report stated.

"Mental illness is not a barometer of dangerousness," said Lina Alathari, the center's chief. "But if someone is mentally ill and has other issues going on in their life, we want to make sure they are getting the help they need."

Among other findings: 50 percent of attackers were motivated by grievances related to domestic, workplace or personal situations; 48 percent had a history of nonviolent and violent criminal charges; and most had at least one significant stressor, such as financial instability.

The Secret Service wants to encourage identification of such people early to deter future violence by looking at low-threshold behavior markers.

"We want to provide training to the community on behavior that might elicit concern, which may not be indicative of violence," Alathari said, "such as sudden dramatic changes in behavior, or more absenteeism."

Rasheka Barnes, who works in security at the private Flint Hill School in Viriginia, said the conference was a good refresher. She had previously worked at a public school, where they had a threat assessment team.

"I want to make sure the threat assessment team at Flint is in place," she said.

The report built on the findings of the center's 2017 report. Secret Service research specialist Steven Driscoll said it's difficult to draw broad conclusions from a small population of incidents. However, he said, in 2017 all of the perpetrators were male, while one attacker was female and another was in the process of gender reassignment last year.

"Identifying findings like that continues to support the idea that profiling is not the solution," Driscoll said. "There is not one profile or type of person who commits these attacks. We are really broadening our scope to concerning behaviors."

Altahri stressed the need for early intervention with people who pose a risk.

"Prevention is everyone's responsibility," she said. "If you are concerned about someone's behavior, report it to the next obvious person."

U.S. News // 11 hours ago
Senate fails to pass two abortion bills
Feb. 25 (UPI) -- The Senate on Tuesday rejected two abortion-related bills, including one that would ban abortions after 20 weeks.