Gallup: Confidence in church or organized religion falls to 36 percent

Pews inside St. John A.M.E. Church in Ridgeland, S.C. 2015. A Gallup poll released Monday said that 36 percent of respondents had confidence in the church or organized religion. Photo by Tami Chappell/UPI | License Photo

July 8 (UPI) -- Thirty-six percent of respondents to a new Gallup poll released Monday said they have confidence in the church or organized religion, a far cry from the 60-plus percent confidence the institutions enjoyed in the 1970s and 1980s.

The annual poll, which was conducted from June 3-16, measured church or organized religions with 13 other institutions.

Confidence in church or organized religions enjoyed highs of 68 percent in the mid-1970s and from 66 to 61 percent in the 1980s before several popular televangelist scandals made national headlines, including those involving ministers Jim Bakker, Jimmy Swaggart, and Oral Roberts.

"But confidence in organized religion has also declined among those who are religious, including Catholics and Protestants," he added.

Only three of the 14 institutions Gallup poll surveyed captured majority levels of confidence among the respondents -- the military (73 percent), small businesses (68 percent) and police (53 percent).

RELATED How the Civil Rights Act emerged in a divisive U.S. 55 years ago

The results on confidence in the church and religious institutions appeared to support a Pew poll released last week that showed a growing number of Americans no longer claim a religious affiliation.

In that survey, 40 percent of those polled identified themselves as Protestants, which included Baptist, Methodist, nondenominational or dozens of other Protestant faiths. Twenty percent said they did not identify with a religion, topping Catholics at 18 percent.

U.S. News // 21 hours ago
'Lifetime' Oath Keepers member first to plead guilty in Jan. 6 Capitol attack
April 16 (UPI) -- Jon Schaffer, a member of the Oath Keepers, will be the first Capitol rioter to plead guilty to charges for his role in the Jan. 6 attack, according to court documents. 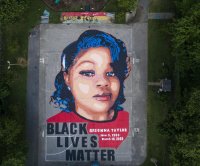