Congressional Democrats have supported a bill to raise the federal minimum wage to $15. File Photo by Brian Kersey/UPI | License Photo

July 8 (UPI) -- Raising the federal minimum wage to $15 per hour would boost wages for some 17 million people, but cost the United States 1.3 million jobs, the Congressional Budget Office said Monday.

The CBO analysis found that in addition to boosting the wages of millions of minimum wage earners, another 10 million who are "otherwise earning slightly" more than $15 per hour also could get a pay hike.

Some 1.3 million Americans would rise above the poverty level, but at the cost of 1.3 million U.S. jobs.

Democrats in Congress have introduced legislation seeking to more than double the current federal minimum wage of $7.25. Opponents say the increased costs would be prohibitive for some smaller businesses, resulting in loss of jobs as illustrated by the non-partisan CBO report.

The CBO said a $12 per hour minimum wage would have "smaller effects" on the U.S. economy and job market. By 2025, it would result in wage increases for 5 million workers earning less than $12. Another 6 million who make slightly more than $12 could also see an increase. The increase would result in the loss of about 300,000 jobs.

A $10 per hour minimum wage would see wage increases for 1.5 million workers, with another 2 million possibly seeing a raise. There would be "little effect" on employment, the CBO said.

Rep. Bobby Scott, D-Va., who has supported a federal minimum wage increase, said the CBO's estimates were in favor of a pay boost.

"The Congressional Budget Office's report comes to a clear conclusion: The benefits of the Raise the Wage Act for America's workers far outweigh any potential costs," he said in a statement.

Rep. Steve Womack, R-Ark., said the report proved too many jobs would be lost under such a wage hike.

"According to the non-partisan @CBO, the Dems' plan to increase the federal minimum wage to $15 per hour would put millions of Americans out of work," he said. "House Democrats should work with Republicans to continue growing the economy and creating high-quality jobs." 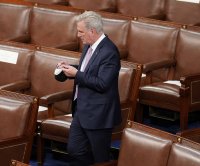