July 7 (UPI) -- The head of the U.S. Citizenship and Immigration Services said immigration authorities are prepared to carry out deportations of about 1 million people.

"They're ready to just perform their mission, which is to go and find and detain and then deport the approximately one million people who have final removal orders," Cuccinelli said.

Trump delayed a 10-city ICE raid planned for the end of last month but said deportations would take place if Democrats weren't able to successfully negotiate changes to immigration policies including asylum practices and "loopholes" for migrants to enter the United States.

Then-Acting Immigration and Customs Enforcement Director Mark Morgan also said at the time that he still has the "green light" to carry out deportations.

Cuccinelli said the details of the deportations, including how many undocumented immigrants are deported will be determined at ICE's discretion.

"They've been all the way through the due process and have final removal orders. Who among those will be targeted for this particular effort ... is really just information kept within ICE at this point," he said. "The pool of those with final removal orders is enormous."

Also Sunday, Acting Security Secretary Kevin McAleenan said on ABC News' This Week that he did not accept reports of unsanitary conditions, overcrowding and lack of food and water at a U.S. Border Patrol station in Texas.

"We have no evidence that children went hungry," said McAleenan. "Police station cells are not a good place for children, as I've said dozens of times."

Last month 200 children were removed from the Clint Border Patrol station in El Paso Count, Texas after the office of Rep. Veronica Escobar, D-Texas, sent a letter to immigration authorities based on the report from the Human Rights Watch that children had lived in the Clint short-term facility for up to four weeks, well above the 72 hours maximum limit set by U.S. law.

McAleenan said Sunday that food and water supplies at the station were "adequate" and that migrants in holding centers had access to showers and clean living facilities.

"I'm not denying that there are challenging situations at the border, I've been the one talking about it the most," he said.

He added the Department of Homeland Security had been facing and "overflow situation" with hundreds of children crossing every single day and that the agency had reduced the number of children in its custody to 350 from 2,500 at the beginning of June. 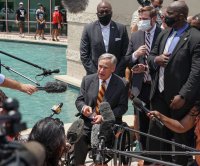 U.S. News // 5 hours ago
Zalmay Khalilzad resigns as U.S. envoy for Afghanistan
Oct. 18 (UPI) -- Ambassador Zalmay Khalilzad has resigned from his post as the United States lead diplomat to Afghanistan following the late summer exodus of the U.S. military from the war-torn country.

U.S. News // 9 hours ago
Trump sues Jan. 6 committee to prevent release of White House records
Oct. 18 (UPI) -- Former President Donald Trump on Monday filed a lawsuit against the House committee probing the Jan. 6 insurrection in a bid to keep it from examining White House records related to the attack.