President Donald Trump signs a bill for border funding in the Oval Office at the White House on Monday. Photo by Kevin Dietsch/UPI | License Photo

The version of the bill, which originated in the Senate, includes nearly $3 billion to provide humanitarian aid and increase security measures at the border.

"Now what we want to do is we have to do another bill for border security and all of this will go away," Trump said after signing the bill.

The House sent the bill to Trump's desk on Thursday after Speaker Nancy Pelosi initially said Democrats would not engage in negotiations on the Senate version of the bill.

Prior to the Senate vote, the House passed a different version of the bill with a greater focus on protecting migrant children.

Senate Republican leader Mitch McConnell at the time called the House bill "a go-nowhere proposal filled with poison-pill riders which the president would veto."

After the Senate bill reached the House, Pelosi said the chamber would "reluctantly" approve the measure as a way to "get resources to the children fastest." 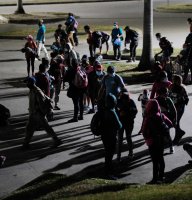 U.S. News // 13 hours ago
U.S. logs $660B budget deficit in March as pandemic stimulus rolls out
April 12 (UPI) -- The United States spent nearly $660 billion more than it collected in revenues during March and its 2021 deficit surged to $1.7 trillion due to pandemic stimulus spending, officials reported Monday.