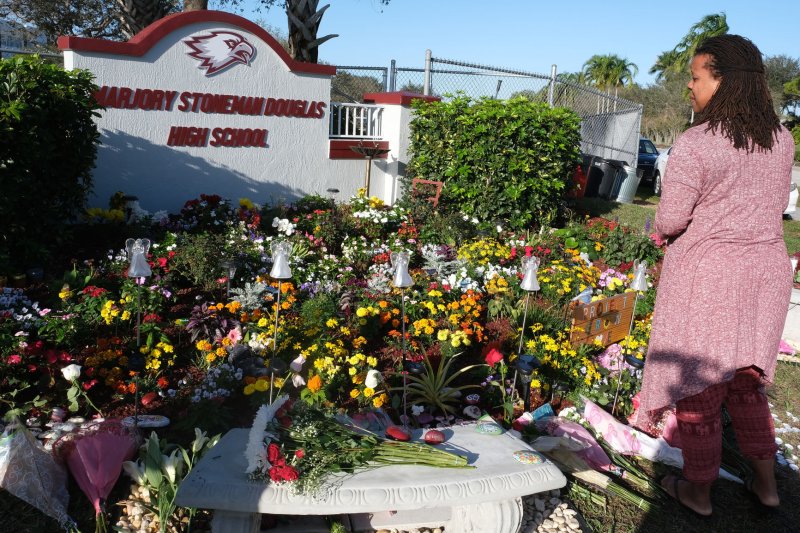 The parents of Carmen Schentrup said their daughter would still be alive if the FBI hadn't ignored warnings about the Parkland shooter. File Photo by Gary Rothstein/UPI | License Photo

June 28 (UPI) -- The parents of a victim of the 2018 Parkland school shooting sued the federal government Friday, accusing the FBI of ignoring a warning about the accused gunman.

April Schentrup and Philip Schentrup said that had the FBI followed up on a tip about Nikolas Cruz, the agency could have prevented the attack on Marjory Stoneman Douglas High School that left 17 people dead, including their daughter, Carmen Schentrup.

The lawsuit says a woman warned the FBI that Cruz planned "to slip into a school and start shooting up the place."

"He wanted to kill people, and he had the means to do so -- he had spent the last several months collecting rifles and ammunition," the lawsuit says. "Forty days later, Mr. Cruz did just what [the] tipster warned the FBI he would do.

"If the FBI had complied with its mandatory obligations to investigate and intervene in Cruz's plans to carry out a mass shooting at Stone Douglas High school, Cruz would not have succeeded in carrying out his attack and Carmen Schentrup would not have been killed."

A month after the shooting, the FBI told U.S. lawmakers the bureau made errors in responding to tips regarding Cruz.

"We made mistakes here, no question about that," Acting Deputy Director David Bowditch told the committee. "That said, even had we done everything right I'm not sure we could have stopped this act, but it would have been nice to try. It sure would have been nice for our investigator to sit down in front of Mr. Cruz and actually have that discussion."

The FBI said it received a tip in January at its call center about Cruz. The caller provided information about Cruz's gun ownership and his desire to kill people. In written testimony to the committee, Bowditch said the FBI also got an email warning in September saying someone with Cruz's name posted plans to be "a professional school shooter" on his YouTube page.

When asked by committee chairman Sen. Chuck Grassley, R-Iowa, if the FBI warned local law enforcement about the tips, Bowditch said no.

"I don't know why the call taker did not do so. She conferred with her supervisor and made some sort of a presentation about what was contained in that call...The call was very explicit," he said. "However, they made a decision to close it, no lead value and no call was made to the local jurisdiction."

U.S. News // 2 hours ago
Biden, first lady to visit Kentucky to tour flooding damage, meet with families
Aug. 8 (UPI) -- For the second time in less than a year, President Joe Biden will travel to Kentucky on Monday to tour devastation wrought by a natural disaster that killed dozens of people.

U.S. News // 3 hours ago
Two months into 2022 season, nary a hurricane so far in the Atlantic basin
By the time the third month of the hurricane season began, the Atlantic basin had long gone quiet without any tropical activity at all since just prior to the July 4th holiday. However, that could change.

U.S. News // 9 hours ago
Police ask for public's help to find car linked to 4 murdered Albuquerque Muslim men
Aug. 8 (UPI) -- Officials and authorities in Albuquerque, N.M., are calling on the public to help track down a dark silver sedan described as a vehicle of interest in the recent deaths of four Muslim men in the city.