The U.S. Supreme Court ruled that a law requiring increased prison sentences for the use of a gun during a "crime of violence" was unconstitutionally vague. File Photo by Kevin Dietsch/UPI | License Photo

June 24 (UPI) -- A divided Supreme Court ruled Monday that a federal law requiring longer prison sentences for using a gun during a "crime of violence" is unconstitutionally vague.

"In our constitutional order, a vague law is no law at all," Gorsuch wrote. "Only the people's elected representatives in Congress have the power to write new federal criminal laws. And when Congress exercises that power, it has to write statutes that give ordinary people fair warning about what the law demands of them."

The case presented to the Supreme Court involved two men -- Maurice Davis and Andre Glover -- who were convicted of several robbery charges and another federal statute that required increased mandatory minimum sentences for a "crime of violence."

Gorsuch's opinion stated that Congress should have explicitly included criminal convictions such as robbery in the statute if it was meant to be applied to them. 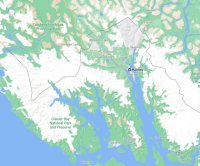