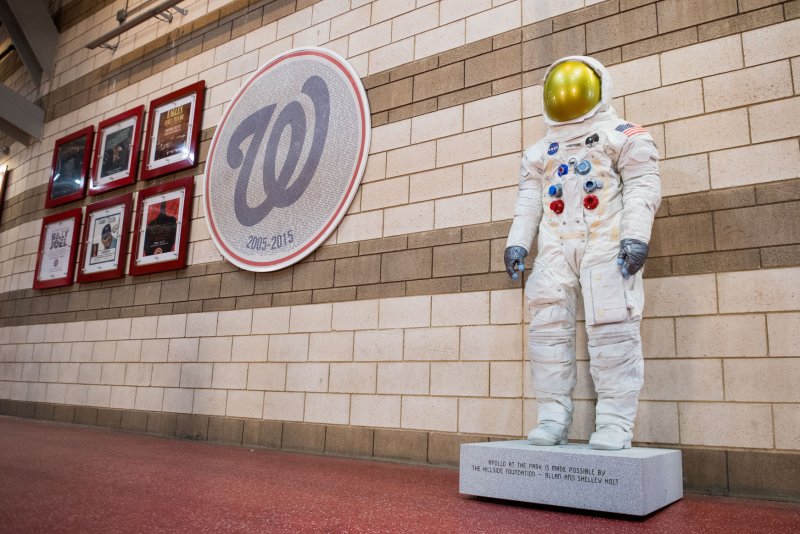 A replica of the spacesuit Neil Armstrong wore on the moon is on display at Nationals Park in Washington, D.C., and several other ballparks around the country in celebration of the 50th anniversary of the moon landing. Photo by Kevin Dietsch/UPI | License Photo

June 11 (UPI) -- The 50th anniversary of the Apollo 11 mission -- the first time men walked on the moon -- will be celebrated with events, many in the places that helped make it happen, from Houston to Cape Canaveral, Fla.

The 12 living Apollo astronauts have full schedules. Model rocket launches, fancy soirees and throwbacks including old launch footage and even mock-ups of a 1960s-era living room are among the plans.

Hundreds of millions watched the first moon landing, and millions will be marking the anniversary this year. The broad scale of events evokes the nationwide effort that occurred at multiple locations to make the moon missions a reality.

An interactive virtual game about the history of lunar exploration and moon landings called "Be the Astronaut" is touring the country and will become permanent at the Virginia Air and Space Center in Hampton, Va., and at Nevada Space Center in Reno, Nev. The game features a large console exhibit that allows players to practice orbiting and landing a capsule faced with math, science and engineering problems.

Apollo 11 launched July 16, 1969, from Kennedy Space Center in Florida. This summer on that date, the visitor complex will set up big-screen monitors at a launch viewing area, showing the Apollo 11 liftoff footage at the exact time, 9:32 a.m. Eastern. Additional events are planned at Kennedy for the July 20 moonwalk anniversary and July 24 splashdown anniversary.

At Space Center Houston, next to NASA's Johnson Space Center, the summer will feature a "Journey to Space" exhibition that shows off the gloves Armstrong wore on the Apollo 11 mission, among other things. On July 20, the center plans a full day of events, speakers and music. The day will end with a countdown to 9:56 p.m., the local time for the first step on the moon.

In Huntsville, Ala., where the Apollo Saturn V rocket was designed, one of the big events will be the July 16 attempted launch of 5,000 model rockets at once, aimed at setting a world record.

"We want everybody to have fun and remember what an amazing accomplishment that was 50 years ago," said Pat Ammons, director of communication at the U.S. Space & Rocket Center in Huntsville. "For those who were alive then, we hope they get together with their children or grandchildren and talk about the moon landing and what an exciting time that was."

Inspiring a new generation to explore space is a major theme. The Huntsville events include a free "Pass the Torch" series of panel talks. One features engineers who worked at the nearby NASA Marshall Spaceflight Center, while another offers space historian Robert Zimmerman on how the United States won the first space race.

France and Australia are among other nations in which Apollo events are planned over the summer.

Apollo astronauts Al Worden, Charlie Duke and Walt Cunningham are to appear for the Apollo anniversary at the world's largest annual aerospace event, the Paris Air Show, which runs Monday to June 23. Their events are titled "America's Invitation to Partnership," with a goal of fostering stronger international ties.

"The spirit of innovation and discovery that culminated in six successful lunar landings lives on in U.S. companies large and small, working in collaboration with global partners to surmount new challenges on Earth and in space," the astronauts said in a statement.

The CSIRO Parkes Observatory near Sydney, which received images from the first moon landing and made it possible for 600 million people to watch, plans an open house event on the anniversary weekend of July 20-21.

The 50th anniversary of the splashdown of the capsule after the moon mission, July 24, will be marked at Kennedy Space Center with a separate party, and at the USS Hornet Sea Air & Space Museum in Alameda, Cal.

The Hornet is the vessel that recovered the Apollo 11 astronauts from the ocean after splashdown. The museum aboard the vessel will have a "Splashdown 50" Open House for community organizations on July 20, and a July 24 panel event called Apollo Retrospective, with some of the men who participated in the operation at sea that day.

The Cradle of Aviation Museum in Garden City, N.Y., where Grumman Aircraft built the lunar landing module, will have several events, including a July 20 Moon Fest and Countdown Celebration, including model rockets, shuttle astronauts.

In Seattle, the Museum of Flight is marking a "Summer of Space" with months of events, including a special Apollo exhibit displaying the command module "Columbia." Events July 19-21 are billed as a Lunar Block Party, starting with a Flashback Friday party featuring 1960s games and music.

The U.S. Space and Rocket Center in Huntsville plans another unique tradition to mark the splashdown on July 24 -- a procession to the town square. That will echo a parade in which people carried famed rocket scientist Wernher von Braun on their shoulders through the streets following the successful completion of Apollo 11.

"We want this to be not only a look back at those accomplishments and what got us there, particularly the engineering, but also the people who got us there," Ammons said. "They accomplished something no one thought possible."

U.S. News // 5 hours ago
Wendy's sale on the table amid rising costs
May 25 (UPI) -- Wendy's could be for sale after the burger chain's largest shareholder, Trian Partners, announced it had filed with the U.S. Securities and Exchange Commission to explore a transaction to boost company stock.

U.S. News // 18 hours ago
Biden orders federal policing reforms on 2nd anniversary of George Floyd's death
May 25 (UPI) -- On Wednesday, the second anniversary of the police killing of George Floyd in Minneapolis, President Joe Biden signed an executive order that aims for policing reforms regarding racism and excessive use of force.
Advertisement