Texas will raise the minimum age to purchase tobacco products from 18 to 21 on Sept. 1. Photo by psja1000/pixabay

June 9 (UPI) -- Texas will become the 15th state to raise the minimum age to purchase all tobacco products, including e-cigarettes, from 18 to 21.

On Friday, Gov. Greg Abbott signed the legislation, which takes effect Sept. 1. Those in the military will still be able to buy the products if they are 18-20.

Anyone caught breaking this new law will face a Class C misdemeanor and a fine of up to $500.

Illinois' governor signed similar legislation in May. The New York Senate passed legislation on April 1 the governor is expected to sign.

Other states raising the law are Arkansas, California, Delaware, Hawaii, Maine, Maryland, Massachusetts, New Jersey, Oregon, Utah, Vermont, Virginia and Washington, according a tally by the American Lung Association. Also hundreds of cities and counties have raised the minimum age.

"Delaying the age when young people first begin to use tobacco -- the leading cause of preventable death -- will reduce the risk they will develop a deadly addiction," Shelby Massey, the Texas Government Relations director for the American Heart Association, told KXAN-TV.

About 95 percent of adult smokers begin smoking before they turn 21, according to the Campaign for Tobacco-free kids.

In Texas, 7.4 percent of high school students smoke and more than 10 percent use e-cigarettes, according to the Texas21 Coalition, who says 498,000 Texas kids alive now will ultimately die prematurely from smoking.

Nationally, 27.1 percent of high school students and 7.2 percent middle school students used a tobacco product in 2018, according to the Centers for Disease Control and Prevention in a report released in February.

E-cigarette usage climbed 78 percent in one year, the CDC said.

Cigarette smoke contains more than 7,000 chemicals, about 70 of which can cause cancer, and nearly all tobacco products, including e-cigarettes, contain nicotine, according to the CDC.

U.S. News // 11 hours ago
Man held in N.C. plotted to attack Biden, federal officials say
Oct. 23 (UPI) -- Federal officials say a man who faces child pornography in North Carolina is linked to what they say were plans to carry out acts of domestic terrorism, including an attack on Democratic presidential nominee Joe Biden.

U.S. News // 15 hours ago
California court says Lyft, Uber must classify drivers as employees
Oct. 23 (UPI) -- After months of legal dispute, a California appellate court has ruled that ride-share operators Uber and Lyft must consider their drivers employees -- a prospect that has both companies threatening to leave the state. 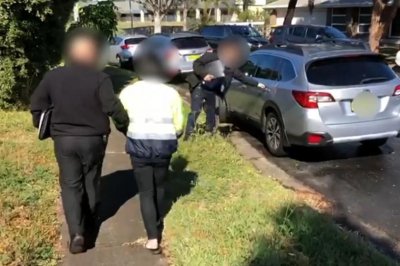