Walmart now has 120 ultra-fast electric chargers at its stores with more to come. Photo courtesy of Walmart

June 6 (UPI) -- Walmart has installed electric vehicle charging stations at more than 120 locations across the United States, the retailer said Thursday -- and plans more in the future.

Walmart partnered with Electrify America to install and operate the chargers to meet the goal of becoming the largest retail host for chargers in the country.

"This milestone marks an important moment in the expansion of our charging station network," Electrify America COO Brendan Jones said in a statement. "We look forward to continuing our work with Walmart to make electric vehicle charging faster and more convenient for consumers across the country, and in turn, encourage more adoption of zero-emissions vehicles."

The chargers are located at stores in 34 states, mostly off major highways. Dozens more chargers are planned for major metro areas. The Electrify America chargers have been installed quickly, with the first in Hope, Ark., last summer. Since then, new chargers have opened every three days, on average.

The DC Fast Chargers can give an electric vehicle up to 20 miles of range per minute. There's also a 150 kilowatt charger.

The chargers are mostly concentrated on the east and west coasts or in major urban areas. The charger network gives electric vehicle owners access to rural communities and driving routes.

The next phase of charger stations will put them in an additional 12 states, including California, the United States' largest EV market.

Electrify America said it will invest $2 billion over the next decade in electric vehicle infrastructure and education. Overall, more than 2,000 chargers across 484 sites in 17 metropolitan areas are planned.

Electrify America is a subsidiary of Volkswagen Group of America born out of the $10 billion settlement with U.S. federal regulators over the diesel emission scandal of 2016.

Walmart also said this week it's upgrading the look of employees. Gone are the normal blue vests in favor of a more environmentally friendly design. All 160,000 Walmart employees will get new vests that are weaved from recycled plastic bottles. Each is made from 15 bottles. The darker blue/gray fabric is lighter weight, breathable and more stain resistant. They will come in different trim colors such as green, blue, hot pink and orange.

The vests will be personalized with v-necks and high collar versions, similar to a turtle neck. Walmart relaxed its dress code last year, allowing store managers to wear sneakers and employees to wear any color jeans they want.

U.S. News // 8 hours ago
Stimulus relief negotiators hope for deal this week
Aug. 4 (UPI) -- Though congressional Democrats and White House negotiators say they're still far apart on reaching a deal on a new coronavirus relief package, they hope to come to an agreement by the end of the week. 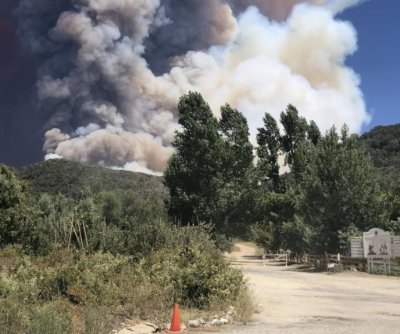