After a severe weather outbreak hammered areas from Texas to Kansas and Missouri early this week, more severe weather will threaten these same areas in the days leading up to the Memorial Day holiday weekend.

Nearly 60 tornadoes were reported on Monday and Tuesday, but no fatalities and only a few injuries have been blamed on the storms.

Widespread flash flooding forced the cancellations of many schools in Oklahoma on Tuesday, and additional storms during the second half of this week will only exacerbate the ongoing flooding and trigger new flooding issues.

"Aggravated flooding is a significant concern in southeastern Kansas, northeastern Oklahoma and southwestern Missouri as more downpours and severe thunderstorms erupt late Wednesday into Wednesday night, repeating over some of the same communities," according to AccuWeather Senior Meteorologist Kristina Pydynowski.

"The tornado threat will be highest into Wednesday evening from central and northeastern Oklahoma to southeastern Kansas and southwestern Missouri," according to AccuWeather Meteorologist Brett Rossio. "Within this area, there is a risk for long-lived and destructive tornadoes (of EF2 strength or stronger) to be produced."

Tulsa, Okla.,, and Joplin, Mo., are among the cities facing the greatest tornado threat.

For residents of Joplin, Wednesday's danger comes on the anniversary of the devastating EF5 that tore through the city in 2011.

Drenching and locally severe thunderstorms will also spread northeastward into central and northern Illinois on Wednesday night. While flash flooding and damaging winds will be the greatest risks in Illinois, there can be isolated incidents of hail and a tornado.

The seemingly endless threat for severe weather will continue on Thursday, partially due to a large and persistent dip in the jet stream across the western United States.

Each storm system that dives through the West and Four Corners region then has nowhere to go but into the southern and central Plains. When these systems interact with moisture and humidity being drawn northward from the Gulf of Mexico, the ingredients come together for severe weather outbreaks.

One of these systems will eject into the Plains on Thursday, triggering more severe thunderstorms from southwestern Iowa and southeastern Nebraska into west-central Oklahoma and the Texas Panhandle in the afternoon and evening.

While the threat for large, long-lasting tornadoes should be significantly less than what it was on Monday and Tuesday, AccuWeather meteorologists are still monitoring the potential for several tornadoes to spin up.

The main threats from Thursday's storms will be damaging wind gusts, flooding downpours and incidents of large hail.

AccuWeather meteorologists will also be monitoring the potential for the remains of Wednesday night's thunderstorms to spark more stronger thunderstorms on Thursday afternoon in southern Missouri.

By Friday, another round of severe storms will erupt in nearly the same region of the southern Plains, but shift eastward into parts of the Midwest along the northern edge of a dome of heat building across the South.

Similar to Thursday, the main threats from Friday's storms will be flash flooding and destructive winds, but an isolated tornado cannot be ruled out.

Storms may move into Chicago and Kansas City, Mo., just in time for the evening rush hour on Friday and rattle communities around Des Moines, Iowa, during the afternoon.

Because multiple storms may move repeatedly over the same locations late this week, flooding will again be a major concern. Some communities may receive another 3 inches to 6 inches of rain on top of what already fell early this week.

Oklahoma City has received nearly 10 inches of rain already this month, which is more than double what the city typically receives for the entire month.

Many rivers from Oklahoma to Missouri and Illinois are currently in moderate to major flood stage, and the additional rainfall will prevent these waterways from falling back to normal levels or even below flood stage.

Bird Creek at Avant, Okla., reached a record crest of 36.52 feet on Tuesday, breaking the old record crest by more than 4 feet. Although the creek has fallen below flood stage on Wednesday, many other streams and rivers in northeastern Oklahoma are expected to remain above flood stage through the end of the week.

With volume on the roadways increasing late this week in advance of the Memorial Day weekend, motorists can expect even longer travel delays on parts of interstates 40, 70 and 80, as well as surrounding roadways, as a result of the stormy weather.

Be sure to reduce speeds on wet roadways and in heavy downpours to reduce the risk for hydroplaning when traveling at highway speeds.

In addition, large hail can cause serious damage to crops and vehicles not under a garage or protective covering and also endanger the lives of anyone caught outdoors.

If a severe thunderstorm or tornado warning is issued for your community, be sure to seek shelter inside a basement or storm shelter away from doors and windows to lessen the threat for death or injuries.

Have a backup generator handy, if possible, since the strong winds can knock down trees and power lines, leading to widespread power outages.

Unfortunately, the weather pattern responsible for the severe weather shows no signs of changing through the Memorial Day weekend. Residents in the Central states should remain vigilant and be prepared for additional rounds of severe weather through early next week. 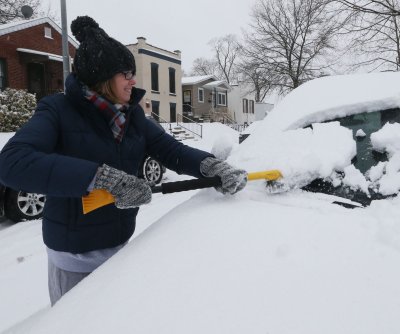