May 20 (UPI) -- A transgender woman who was attacked last month by a group of men in Texas was found dead over the weekend, police said.

Weddington said during a news conference police were responding to a shooting call early Saturday when they found Booker lying face down in the street, "deceased from homicidal violence." Booker was identified the following day, as there was no identification on the body, he said.

The woman's death comes weeks after she was assaulted. A 29-year-old suspect in her beating last month was not believed to be connected to her death.

"There is nothing at this time to connect [the man] and the offense that occurred [Saturday]," Weddington said.

Booker was attacked April 12 near a south Dallas apartment complex following a minor traffic accident, police said. During a verbal confrontation, she was assaulted by one man before several others joined in the attack, which was recorded.

Waddington said the Dallas Police Department was working with federal partners to see if it "meets the threshold for a hate crime." He said Sunday officers are trying to identify other assailants in the video.

"We are encouraging the public to come forward with information to bring closure to both of these offenses," he said.

At least three other black transgender women have been shot dead this year in the United States, according to Human Rights Campaign. Twenty-six transgender victims were killed in 2018, the group said.

Following the attack last month, Booker told a crowd assembled for a rally that she was grateful to have survived.

"This time, I can stand before you, where in other scenarios, we're at a memorial," she had said. 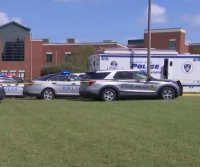 U.S. News // 8 hours ago
Two students shot at Virginia high school; suspect in custody
Sept. 20 (UPI) -- Two students were shot and a suspect was taken into custody after a shooting at a high school in Virginia on Monday, police said.

U.S. News // 8 hours ago
U.S. COVID-19 death toll surpasses total of 1918 Spanish flu pandemic
Sept. 20 (UPI) -- The death toll from COVID-19 surpassed that of the 1918 Spanish flu outbreak Monday, making it the deadliest pandemic in U.S. history, according to a count compiled by Johns Hopkins University.

U.S. News // 8 hours ago
Border agents criticized for treatment of Haitian migrants in Del Rio, Texas
Sept. 20 (UPI) -- Images and videos taken by journalists and widely shared on social media show agents on horseback charging and herding migrants attempting to cross the Rio Grande, including an agent swinging his reins toward a migrant.