The central United States is once again on heightened alert as severe storms, which could produce life-threatening impacts such as long-track tornadoes and flash flooding, ignite across the region through Monday night.

The National Weather Service Storm Prediction Center has issued a high risk for portions of Oklahoma and Texas, the first time a high risk warning has issued by the agency since May 2017. This is the highest tornado risk since April 14, 2012.

A high-risk area indicates that an intense outbreak of severe storms is expected.

The area that is at the highest risk to see severe thunderstorms will extend from western Texas to southwestern Kansas eastward through Kansas, into eastern Oklahoma and north-central Texas, according to AccuWeather meteorologists.

Already, storms on Monday have produced up to golf ball-sized hail and strong wind gusts across the Texas Panhandle and Oklahoma.

Multiple tornadoes have been confirmed including one tornado north of Mangum, Okla., and another tornado near Paducah, Texas.

According to AccuWeather forecasters, straight-line wind gusts, in lieu of a tornado, can reach an AccuWeather Local StormMax of 90 mph, which will knock down trees and cut off power in some communities.

Monday's severe weather danger comes on the heels of a severe weather outbreak that struck the region late last week through the weekend. At least 50 tornado reports came in across the central and southern Plains. The threat will not end Monday, with many areas at risk again Tuesday.

This image shows the central U.S. around midday Monday on May 20, 2019. (Image/NOAA/CCIRA/RAMMB)

Days after surviving a close encounter with a tornado in Nebraska, AccuWeather Extreme Meteorologist Reed Timmer will be in the field chasing the storms and providing live updates for the AccuWeather Network.

Timmer said Monday's threat is one of the "more prolific severe weather setups we have seen in several years." Residents in the high-risk area should have a severe weather safety plan in place, he added.

In advance of the storms, schools have been closed in parts of Oklahoma, including the Oklahoma City metro area. Tinker Air Force Base said it was evacuating aircraft but the base's operating status remains open.

The storm southeast of Midland, Texas is very dangerous and has a history of producing a tornado.

708 PM CDT The storm SE of Midland has an incredible structure and is still VERY DANGEROUS! This storm has a history of producing a TORNADO and can still produce one. If you are in the warned area, please TAKE COVER! #txwx pic.twitter.com/HFtAuzfSOB— NWS Midland (@NWSMidland) May 21, 2019

A new Tornado Warning has been issued for a storm located 9 miles south of Lomax, Texas. A tornado is possible in this area as well as lightning, heavy rainfall, and gold ball sized hail.

A tornado that touched down in Mangum, Oklahoma has caused significant damage to buildings and homes.

AccuWeather Extreme Meteorologist Reed Timmer is chasing a very large tornado north of Mangum, Oklahoma. If you are near this area, take shelter immediately!

Tornado damage to houses and buildings has been reported in Mindenmines, Missouri and in Barton County, Missouri. The tornado has since lifted.

A tornadic supercell southwest of Gould, Oklahoma will likely produce a large tornado. If you are near this area, seek shelter immediately.

There is a serious threat for hail in excess of 3" today across portions of Texas and Oklahoma. Hail of this magnitude can lead to extensive damage to anything left outside.

AccuWeather Extreme Meteorologist Reed Timmer reports a dangerous tornado is heading toward Crescent, Oklahoma. If you are near this area, take cover now!

A confirmed tornado was located near Paducah, Texas moving northeast at 40 mph. Reports indicate it is a rope tornado.

A new tornado watch has been issued across central Oklahoma and parts of northern Texas. This is a particularly dangerous situation and includes Oklahoma City, Tulsa, Ardmore, and Elk City, Oklahoma, and Wichita Falls and Seymour, Texas.

"This is only the second watch in SPC history where every category of watch probabilities ([tornado], wind, hail) are at greater than 95 percent. The only other watch like this was issued for Alabama on 27 April 2011," SPC said on Twitter.

The City of Moore, Okla., which has been struck by multiple powerful tornadoes in its history, has said that due to the severe weather forecast for central Oklahoma, buildings and city operations will be ceasing at 1 p.m. local time.

"This includes City Hall, Public Works, Parks & Recreation (The Station and the Brand Senior Center). Thank you and please be weather aware through today, tonight, and into tomorrow," officials said in a statement.

May 20 is the six-year anniversary of the EF5 tornado that leveled Moore.

A billboard along a highway in Oklahoma is warning drivers of the elevated severe weather on Monday. (Twitter/@RyanToemmes)

The first tornado watch of the day has been issued for part of the Texas Panhandle. A tornado watch means that conditions will become favorable for tornadoes to develop in the coming hours.

This is a particularly dangerous situation. Intense tornadoes, grapefruit-sized hail and winds over 70 mph are likely with storms that develop in this area.

U.S. News // 24 minutes ago
Freight train derails in northern Iowa hauling ammonium nitrate
May 17 (UPI) -- A fire from a derailed freight train in northern Iowa continued to burn on Monday and some people are still away from their homes after officials ordered an evacuation. 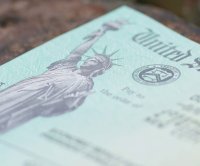 U.S. News // 6 hours ago
Tax Day in America: Most in U.S. required to file 2020 returns by Monday
May 17 (UPI) -- Monday is Tax Day in America -- the delayed deadline for most U.S. taxpayers to file their 2020 federal return, but individuals can still consider asking for an extension.

U.S. News // 7 hours ago
Slammed by hurricanes in 2020, New Orleans working to prep for 2021
One city that's ramping up preparations and is one of the most vulnerable in the United States due to its location along the Gulf coast, an active corridor for hurricanes as was put on display in 2020.