May 15 (UPI) -- The White House announced Wednesday it will not back a global call to combat extremism online, an effort spearheaded by New Zealand Prime Minister Jacinda Ardern two months after a deadly attack at two mosques in her country was live streamed on Facebook.

The White House declined to support the so-called Christchurch Call for Action, saying it had concerns about First Amendment rights. Countries signing on to the pledge plan to coordinate efforts to limit extremist content on social media.

The pledge is named for the largest city on New Zealand's south island, Christchurch, where a gunman opened fire on two mosques, killing 50 people. He live streamed the attack on Facebook Live, prompting the social media network to remove 1.5 million copies of the video from its platform over the course of about 24 hours.

The White House Office of Science and Technology Police said that though it doesn't support the pledge, it's committed to supporting its overall goals.

"We maintain that the best tool to defeat terrorist speech is productive speech, and thus we emphasize the importance of promoting credible, alternative narratives as the primary means by which we can defeat terrorist messaging," the office said.

"We encourage technology companies to enforce their terms of service and community standards that forbid the use of their platforms for terrorist purpose."

Ardern was in France Wednesday to discuss the effort with French President Emmanuel Macron, and other world and tech leaders. She told CNN she doesn't believe the tech companies wanted to see their platforms used for acts like the Christchurch shooting.

"But I don't think it's enough for us to say, well, in accepting that we all want an open and a free and secure Internet that we have to accept that these kinds of activities will happen as a by-product," she said. "But we do have to put our minds collectively to the solution."

Meanwhile, on Wednesday, Facebook announced it planned to spend $7.5 million on new research to develop ways to prevent users from utilizing the platform for nefarious purposes.

"Those tech companies, I do not for a moment believe they wanted to see their platforms used for such a vile, heinous act," NZ PM @jacindaardern tells me.

But she says an open internet should not mean having to "accept that these kinds of activities will happen as a by-product." pic.twitter.com/vg8CQjXFPH— Christiane Amanpour (@camanpour) May 14, 2019

U.S. News // 55 minutes ago
NBA's LA Clippers break ground on $1.2B arena, to be named Intuit Dome
Sept. 17 (UPI) -- The NBA's Los Angeles Clippers will break ground Friday on a new arena that's scheduled to open in a few years -- and it will be called the Intuit Dome, following a new 23-year naming rights deal.

U.S. News // 2 hours ago
Biden OKs sanctions against Ethiopian leaders over Tigray fighting
Sept. 17 (UPI) -- President Joe Biden signed an order Friday that authorizes economic sanctions against leaders in Ethiopia over the fighting in the Tigray region, where conflict has pushed Ethiopians to the brink of famine. 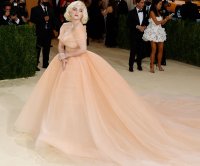 U.S. News // 13 hours ago
Grand jury indicts lawyer with ties to Hillary Clinton's 2016 campaign
Sept. 17 (UPI) -- Special counsel John Durham has charged lawyer Michael Sussmann with lying to the FBI in 2016 concerning the investigation into links between Russia and the campaign of Donald Trump.
Advertisement