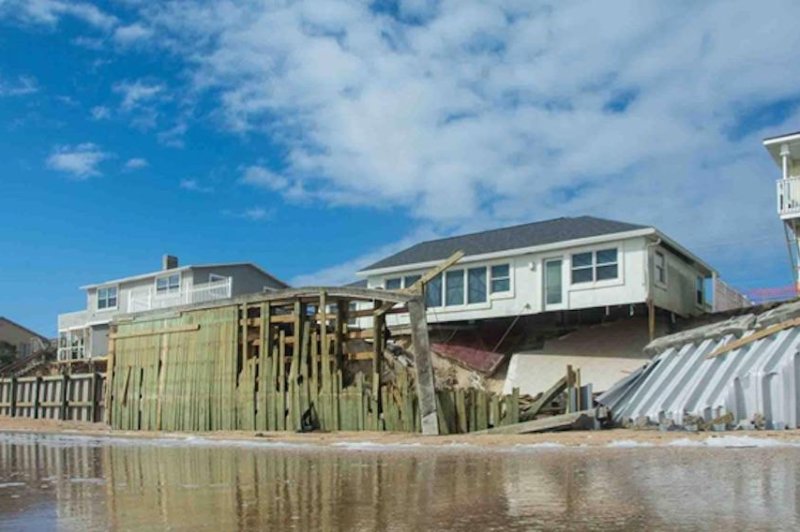 Seas left little beach behind after Hurricane Matthew along the northern Atlantic Coast of Florida. Photo courtesy of Brevard County

The study, led by researcher Betsy Von Holle, found the most at-risk wildlife are seabirds who nest along shallow coastal areas -- specifically the gull-billed tern and sandwich tern. Brown pelican nesting areas were not as risk-prone. Sea turtle nesting showed increased vulnerability over a 1999 study.

More than 1,200 miles of coastline is projected to have an increase in coastal erosion vulnerability by 2030, according National Science Foundation researcher Von Holle published recently in the Journal of Wildlife Management.

Von Holle is affiliated with the University of Central Florida. Other institutions involved in the study included Virginia Tech.

Fully 75 percent of the coastal area cited -- from Cape Hatteras, N.C., to Cape Canaveral, Fla. -- is at high risk for erosion and flooding by rising seas and storm events, the study concludes. That is an increase from about 45 percent of coastal area found to be at high risk in a similar study published by the U.S. Geological Survey 20 years ago.

The study was accompanied by a map that depicts high-risk zones in red. Most of northern and central Florida's Atlantic Coast is red.

"We were surprised at the big jump in vulnerable areas," Von Holle told UPI. "We're not saying that these areas are all going away, but people should be aware of that when they are managing for these impacts."

In some areas, though, the only result might be a faster and higher buildup of sand dumped on beaches in multibillion-dollar beach renourishment programs. Such fixes are effective in the short term, but could be masking the growing crisis, according to the study and local officials,

Von Holle said the study was "an important initial step in managing coastal species" in the face of climate change and sea level rise -- a broad-scale attempt at predicting susceptible areas.

The study suggests tailoring restoration strategies for specific locations and species. Governments in vulnerable areas with dense seabird populations, for example, might adopt "setback regulations or a minimum distance from mean high tide line" for future development. That would allow for natural inland migration of beaches as seas rise, the study said.

Beach restoration of low-lying areas still would be needed in developed areas where buildings or roads prevent the beach from moving inland.

Von Holle said the problem is exacerbated by heavy buildup of homes, condos, hotels and highways along the coast. With a natural coastline, sand dunes would migrate inland and keep up a barrier between the land and the sea. But hardened concrete coasts don't allow for that.

If sand washes away, there simply is no beach anymore. Ocean waves just lap up against roadways, seawalls or foundations.

Some of the most significant wildlife in the study area reside or nest in Brevard County in central Florida, home to Cape Canaveral National Seashore and Archie Carr National Wildlife Refuge. Those areas, which are prime nesting grounds for sea turtles, are shown at high risk of flooding or storm damage in the new study.

Dave Cheney, a board member with Sea Turtle Preservation Society in Indiatlantic, Fla., said he is not seeing damage to sea turtle habitat yet, mostly due to restoration of sand brought in by dump trucks as part of a regular program. Florida has spent billions on sand renourishment of beaches.

"At this point we haven't seen anything detrimental to the sea turtles," Cheney said. "The data actually shows that sea turtles are doing quite well, especially for green turtles. Beach renourishment is responsible for sea turtle success."

After dump trucks bring in new sand, sea turtles avoid the beach for about a year, he said. Then they return and thrive. He said studies about sea level are cause for concern, though.

Mike McGarry, program manager for beaches, boating and waterways with Brevard County, believes the problem can be dealt with in the short term.

"We'll be able to keep up with it by adding height to account for the higher sea level, make it 11 feet instead of 10 feet," McGarry said. "In 100 or 200 years or so, they may have to decide to evacuate the whole barrier island, but that's not practical for us now."

Other regions are dealing with similar, gloomier outlooks for sea level rise. A recent study in Louisiana, published by Tulane researchers in the journal Ocean Science, found that previous estimates of sea-level impact were underestimating conditions in the area.

Gauges that measure sea level in the area were missing the fact that the land is sinking, or compacting, as the seas rise -- making the impact on low-lying land more severe. That's because gauges are anchored about 70 feet below the surface.

"It should be a wake-up call for people everywhere," said Molly Keogh, a doctoral student and co-author of the study published in June. "Waiting another decade is not the time."

Another report from the Union of Concerned Scientists in 2018 found growing risk to coastal property values around the United States due to sea level rise. That report found that risk is "masked by short-sighted government policies, market incentives and public and private investments that prop up business-as-usual choices and fail to account for sea level rise."

States most at risk by 2100, according to the scientists union, are Florida, with about 1 million homes (more than 10 percent of the state's current residential properties); New Jersey, with 250,000 homes; and New York with 143,000 homes. High-tech Silicon Valley near San Francisco also is at significant risk.