May 9 (UPI) -- The Senate intelligence committee has subpoenaed Donald Trump Jr. to testify about the Russia investigation, becoming the first member of the president's family to be called since the release of the Mueller report.

NBC News, Axios, CNN, The New York Times and other outlets reported that the subpoena seeks answers about prior testimony from Trump Jr. Specifically, the committee wants to ask President Donald Trump's eldest son about his knowledge of a failed deal to build a Trump Tower in Moscow.

Trump Jr. testified before the committee in September 2017 and said he was only "peripherally aware" of the plans. But lawmakers want to go over the issue again in light of testimony from Michael Cohen, President Donald Trump's former personal attorney. In February, he told the House oversight committee he'd informed Trump Jr. and Ivanka Trump about the Moscow project a number of times.

Cohen began a three-year federal prison sentence on Monday for campaign finance violations and tax evasion. He pleaded guilty last year for arranging to pay two women who claimed sexual affairs with Trump in exchange for their silence.

Like former White House counsel Donald McGahn and Attorney General William Barr, Trump Jr. could ignore the subpoena, which could send the matter to court. The Senate intelligence committee has interviewed many of the same witnesses the Mueller investigative team spoke with.

The committee has not publicly confirmed the subpoena.

"We do not discuss the details of witness engagements with the committee," a committee representative told NBC News. "Throughout the investigation, the committee has reserved the right to recall witnesses for additional testimony as needed, as every witness and witness counsel has been made aware."

Barr has released a redacted version of the report from special counsel Robert Mueller, which said investigators found no evidence the Trump campaign colluded with Russia. It did not, however, clear the president of obstruction of justice. Since its release, the president has called the report a vindication and Democratic lawmakers have sought answers to questions raised by the two-year inquiry.

CNBC reported a person close to the president's son called Burr's subpoena a "PR stunt" from a "so-called 'Republican' senator."

U.S. News // 5 hours ago
Lucid Motors announces NYC offices, arrival of new vehicle
June 22 (UPI) -- Lucid Motors, the Silicon Valley electric vehicle startup that holds the distinction of having the longest range of any other EV, announced the opening of a new flagship office in New York City Monday.

U.S. News // 7 hours ago
McDonald's to launch first U.S. rewards program this summer
June 22 (UPI) -- McDonald's announced Tuesday that it will unveil the first U.S. loyalty program in its history this summer. 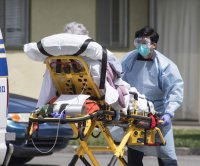 U.S. News // 7 hours ago
Deaths at U.S. nursing homes surged by 170,000 in 2020, watchdog report says
June 22 (UPI) -- Deaths among Medicare patients in nursing homes last year surged by more than 30%, with two pronounced spikes at different times of the year, according to a report by the federal health department's inspector general.