May 6 (UPI) -- Mass shootings at places of worship have Muslims on high alert as they begin to celebrate the holy month of Ramadan, with some hiring armed guards at the mosques.

From Los Angeles to San Francisco, mosques are increasing security so worshipers feel safe. In Sunnyvale, Calif., police said a man intentionally ran over a group of people he believed were Muslims last week in an apparent hate crime.

"People are expressing fear about going to the mosque and mosque leaders are having to double-down on security plans," Council on American-Islamic Relations Executive Director Zahra Billoo said.

Many mosques are installing security cameras inside and outside. The Evergreen Islamic Center in San Jose also locks the gates after each prayer to prevent people from entering the facility.

The Islamic Center of Northridge has considered bringing in armed guards.

"We always have throughout the month of Ramadan, every single day we have security guards that help with parking, but also make sure that everything's civil and everything's right," said Imam Ibrahim Qureshi of the Islamic Center in Northridge. "This year we have been talking about extra measures -- more security cameras. There's also possible talk of having armed security guards."

This comes after 51 people were shot and killed at two different mosques in Christchurch, New Zealand in March. Then, in retaliation, terrorists bombed churches and hotels in Sri Lanka, killing 250 people.

In San Diego, a gunman killed one person and injured three more in April. The suspect arrested for that shooting is also suspected of setting a fire in an Escondido-area mosque. Black churches have also been burned elsewhere across the United States by white supremacists.

Qureshi said much of the problem comes from people who are isolated and have murder in mind.

"They are trying to create more divide, hatred, fear but it's bringing us more closely together," Qureshi said.

"We will be more vigilant, more cautious during our prayers," Qureshi said. "It's a month where we try to be better versions of ourselves. Both mentally, spiritually and physically." 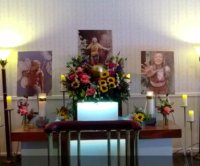