'A miracle': Minor injuries after jet slides off runway into river 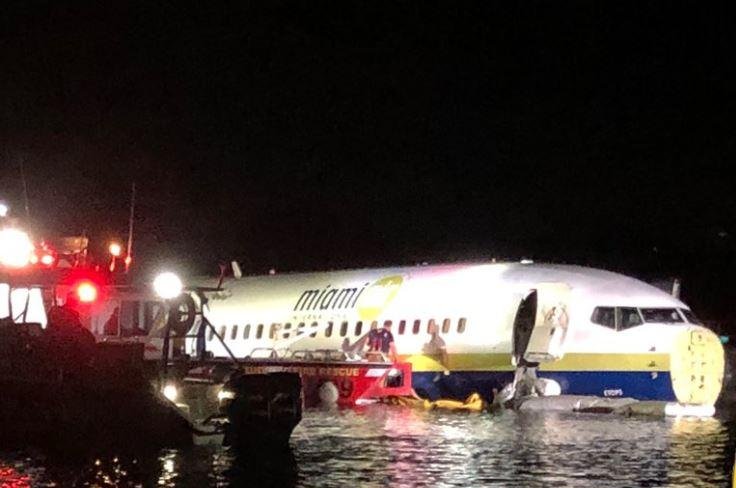 May 4 (UPI) -- A Boeing 737 slid off the runway of Naval Air Station Jacksonville in Florida during severe weather, causing minor injuries among the 136 passengers and seven crew members though pets in the cargo hold are presumed dead.

The jet, which departed from Naval Station Guantanamo Bay in Cuba around 7:30 p.m., came to a rest in the St. Johns River at 9:40 p.m. Friday, said the National Transportation Board, which dispatched a Go Team.

About three-quarters of an inch of rain had fallen at NAS Jacksonville for about 45 minutes before the crash, said John Gaughan, WJXT-TV's chief meteorologist.

The plane was not submerged and "every person is alive and accounted for," according to the Jacksonville Sheriff's Office on Twitter.

"I think it's a miracle," Capt. Mike Conner, commanding of Naval Air Station Jacksonville, said at a news conference. "We could be talking about a different story this evening, so I think there's a lot to say about the professionalism of the folks that helped the passengers off the airplane because it very well could be worse."

Naval Air Station Jackson posted on Facebook that minor injuries were reported, including some treated at the scene.

Jacksonville Fire and Rescue said 21 people were transported to local hospitals. All of them were treated and released by Saturday morning, including an additional two people not initially listed.

RELATED Boeing CEO: 737 Max will be 'one of the safest planes ever to fly'

"Ironically, our Special Operations team trained for an incident like this today with the marine units," the agency tweeted.

The passenger airplane, which is a Boeing 737-800, is operated by Miami Air. WJXX-TV reported Miami Air did not respond to inquiries.

The FAA said the flight was contracted by Department of Defense and not a commercial flight.

Conner said it wasn't known how long it would take to remove the plane from the river. The landing gear appeared to be resting on the river bed.

Tara Lageman, who lives along the river across from the airport, said she didn't hear the plane go down but noticed lights from fire rescue vehicles and police cruisers.

"It was like the 4th of July," Lageman told WJXT-TV. "I came outside and could see all the lights and it was just like a steady stream of emergency vehicles going onto the runway."

Jacksonville Mayor Lenny Curry posted on Twitter: "We are all 1 family. 1 people. 1 City." He followed it up with a tweet: "White House called to help as the situation was developing."

At least four pets were checked in the luggage compartment in the bottom of the plane.

"Unfortunately, they have not been retrieved yet due to safety issues with the aircraft," NAS Jacksonville posted on Facebook. "Our hearts and prayers go out to those pet owners during this terrible incident."

The Boeing 737 plane is not completely submerged but the bottom portion, where the pets were positioned, is underwater.

"There's water in the cargo hold," Kaylee LaRocque, a spokeswoman for the U.S. Navy in Jacksonville, told USA Today. "We are so sad about this situation, that there are animals that unfortunately passed away."

U.S. News // 3 hours ago
Rescuers save 2 people from plane dangling from power lines
Nov. 28 (UPI) -- Rescuers in Maryland early Monday successfully extracted two people from a plane that was dangling 100 feet above the ground from a transmission tower in the city of Gaithersburg, authorities said.

U.S. News // 5 hours ago
Houston issues boil water notice; some schools to remain closed Monday
Nov. 28 (UPI) -- The City of Houston has issued a boil water notice to its millions of residents after water pressure in its main system dropped over the weekend, prompting several school districts to cancel classes for Monday.

U.S. News // 9 hours ago
Rescue mission underway for occupants of plane dangling from Maryland power lines
Nov. 27 (UPI) -- Authorities were working to extract a pilot and a passenger from a small plane dangling 100 feet above the ground Sunday night after it crashed into power lines in Maryland.

U.S. News // 17 hours ago
Storm with high winds, colder air to blast across Midwest, Northeast
More than 125 million people from the Midwest to the Northeast could face disruptive wind gusts from a powerful storm system from Tuesday to Wednesday.

U.S. News // 18 hours ago
Severe weather to threaten 25 million from Texas to Illinois
Approximately 25 million people in the south-central United States will be at risk for severe thunderstorms on Tuesday alone.