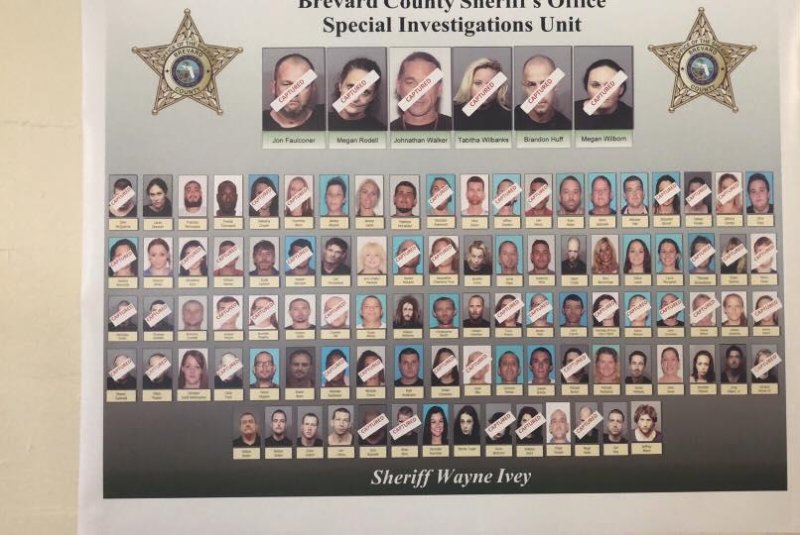 Police in Brevard County arrested over 100 people accused of being members of a drug gang. Photo courtesy of Brevard County Sheriff's Office/Facebook

May 2 (UPI) -- Florida police issued arrest warrants for over 100 members of a suspected criminal drug origination and seized 75 firearms and over 500,000 lethal doses of fentanyl, authorities said.

Brevard County Sheriff Wayne Ivey said officials issued over 104 arrest warrants Wednesday in what is "one of the largest cases within the history of our county."

Ivey said it sized nine pounds of methamphetamine worth $81,000, three pounds of fentanyl with a value over $100,000 and heroin. Brevard County is located on Florida's east-central coast.

"The amount of fentanyl seized as of today is of particular importance, as [Druge Enforcement Administration] estimates there are over 500,000 lethal doses by dividing the seized fentanyl by a typically lethal dose amount," Ivey said in a statement on Facebook. "The Drug Enforcement Administration estimates a 2-milligram dose is lethal for most people."

The sheriff's office identified the suspected leaders of the gang as Brandon Huff, 35; Jonathan Walker, 42; and Megan Wilborn, 31.

The charges of the arrested range from conspiracy and trafficking heroin, fentanyl and methamphetamine to racketeering influenced and corrupt organization, the sheriff's office said.

The arrests began at daybreak with sheriff's agents with the Special Investigations Unit, Fugitive Unit and Game Over Task Force spreading across Brevard County to issue the warrants, the sheriff's office said.

"This is what happens if you deal drugs in Brevard County, you end up going to jail," Ivey said as a long line of people in handcuffs were marched through a courtyard. "This is one of the biggest cases our agency has ever worked, our county has ever seen and the individuals you see here were praying on the addictions of others by selling drugs. They're going to jail and that's where they need to be."

U.S. News // 31 minutes ago
Virginia lawmaker files lawsuit to limit 2 LGBT books to minors
May 20 (UPI) -- Tim Anderson, an attorney and a Virginia State Delegate, said he filed a lawsuit on behalf of Tommy Altman, who is running for Congress, this week in hopes to prevent two LGBT-themed books from being given to minors. 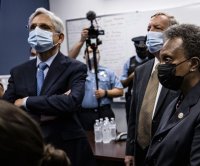