By Danielle Haynes and Daniel Uria
1/6 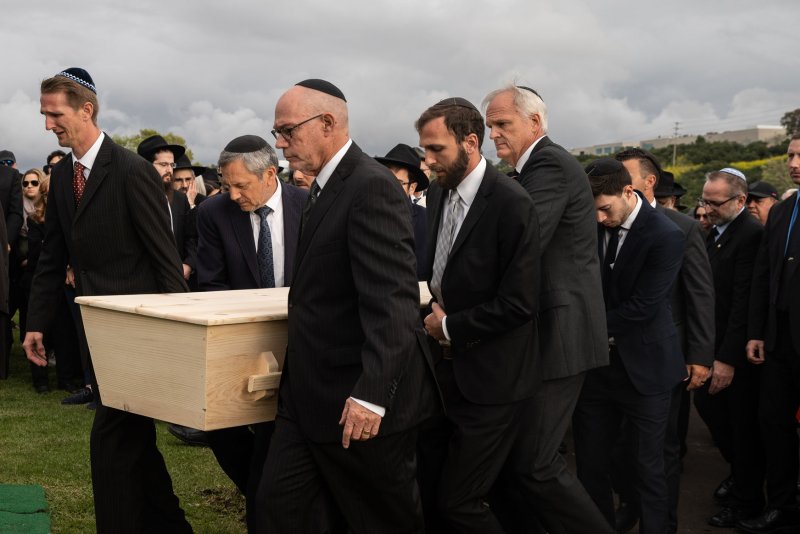 Members of the Jewish community along with family and friends carry the coffin of Lori Gilbert Kaye at El Camino cemetery in San Diego on Monday. Photo by Ariana Drehsler/UPI | License Photo

April 29 (UPI) -- Two days after a gunman opened fire at a San Diego-area synagogue, members of the Congregation Chabad laid Lori Gilbert-Kaye, the woman killed in the shooting, to rest on Monday.

Prior to the ceremony, Rabbi Yisroel Goldstein, who also was injured in the shooting said the funeral for the 60-year-old woman would "salute Lori and her life and keep her legacy alive."

He said Gilbert-Kaye was at the synagogue with her daughter and husband to give special prayers for her dead mother during the Passover service when the shooting started. She died later at a hospital.

"I just remember getting down and covering her with my body and telling her, 'Please be quiet. I don't want the shooter to know that we're here," her friend Rochelle Schwartz told ABC News. "She was just so brave."

During the ceremony Schwartz praised Gilbert-Kaye as a "pillar of the community.

"She has the most generous, kind heart," he said. "We're gonna miss her. She's a very special person. And I pray that this never happens again. We have to work on education and we have to stop this insanity. It's just so tragic."

Her daughter, Hannah, described Gilbert-Kaye as an "extraordinary, dear mother," her best friend and dancing partner.

"We were magic together," she said.

Those who knew her remembered Gilbert-Kaye as a loyal friend who would bring gifts of food when acquaintances married, graduated college or got sick.

"When she buys coffee, she gets a second cup of coffee and a bagel or muffin and finds a homeless person around the corner to give it to," a family friend, Amilia Lev, told The San Diego Union-Tribune.

In addition to Goldstein, 8-year-old Noya Dahan and her 34-year-old uncle, Almog Peretz, were injured.

Police say after his gun jammed, accused shooter John Earnest drove away from the synagogue before calling police and surrendering. He faces one count of first-degree murder and four counts of first-degree attempted murder.

Earnest and his family attended the nearby Escondido Orthodox Presbyterian Church, where pastor Zach Keele called a special session to discuss the attack with the congregation.

"I tried to talk to John several times, but he never said anything, I think it's not good if someone is as quiet as that," parishioner Gerrit Groenewold told USA Today.

Earnest's family released a statement Monday saying they were shocked by his actions and an anti-Semitic letter he wrote. His parents said he and his five siblings were raised to reject hate.

"Our sadness pales in comparison to the grief and anguish our son has caused for so many innocent people. He has killed and injured the faithful who were gathered in a sacred place on a sacred day," the letter read.

"To our great shame, he is now part of the history of evil that has been perpetrated on Jewish people for centuries."

The Earnest family said they are cooperating with investigators and offered praise for first responders.

"How our son was attracted to such darkness is a terrifying mystery to us, though we are confident that law enforcement will uncover many details of the path that he took to this evil and despicable act."

U.S. News // 4 hours ago
Developing storm may bring breath of winter to Northeast
AccuWeather forecasters are intently tracking a developing storm that could potentially bring a wintry mix to parts of Northeast and steady rainfall along Eastern Seaboard as the second week of December gets underway.

U.S. News // 6 hours ago
CDC director: Omicron cases 'likely to rise' as variant detected in 16 states
Dec. 5 (UPI) -- CDC Director Dr. Rochelle Walensky warned Sunday that cases of the COVID-19 Omicron variant are "likely to rise" as they have been detected in at least 16 states.