The number of military veterans farming increased between 2012 and 2017, according to the newly released agricultural census from the U.S. Department of Agriculture. Photo by Jessie Higgins/UPI

Farmers are getting older in the U.S., with the average age climbing to 57.5 in 2017, according to the USDA's newly released agricultural census. Photo by Jessie Higgins/UPI

EVANSVILLE, Ind., April 12 (UPI) -- The latest five-year agricultural census, released this week by the U.S. Department of Agriculture, confirms that the number of farms in the country continues to shrink while the remaining operations are becoming larger.

"The current picture shows a consistent trend in the structure of U.S. agriculture," Hubert Hamer, the USDA's National Agricultural Statistics Service administrator, said in a statement.

This trend is present in nearly every agricultural sector, but it is most prevalent in dairy. During the census period, the United States lost nearly 15 percent of its dairies, while the number of dairy cows in the country increased.

Because the census reflects information collected between 2012 and 2017, it does not include the recent upheaval from America's various trade disputes, which have crashed various crop prices and could force many farms out of business.

The more than 700-page report includes 6.4 million points of information about farms, ranchers and operators.

Some highlights, according to the USDA, include:

- Ninety-six percent of farms and ranches are family-owned.

- The number of military veterans entering farming grew by 11 percent.

- Of the nearly 3.4 million producers in the U.S., only 321,261 were considered "young producers" -- age 35 or less. Those young producers tended to be at larger than average farms.

U.S. News // 4 hours ago
1 dead, 5 injured after shooting on Texas freeway
April 10 (UPI) -- One person died and five others were hurt in a shooting on a Fort Worth, Texas, Friday night, authorities say.

U.S. News // 14 hours ago
Temps hit 38 below zero in Alaskan city, setting new April record
April 10 (UPI) -- A historic cold blast settling into Alaska this week will send temperatures plummeting far below zero, which could topple century-old low-temperature records in one city and even a longstanding state record. 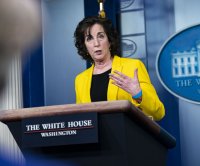