April 10 (UPI) -- A judge on Wednesday ordered former Penn State University President Graham Spanier to report to prison by next month to begin serving his sentence for a child endangerment conviction.

Judge John Boccabella ordered Spanier, 70, to report to prison by May 1 to serve the sentence related to the 2017 conviction for his handling of a 2001 complaint about retired Penn State assistant football coach Jerry Sandusky showering with a boy in the team locker room.

Spanier will serve a two-month sentence for the misdemeanor child endangerment conviction in a county prison followed by two months of house arrest.

He can receive parole after serving the minimum term.

RELATED Texas Tech agrees to end use of race in admissions

Boccabella's order denied requests to change the initial sentence, while also granting Spanier the opportunity to serve his prison term in the Centre County Correctional Facility as opposed to Dauphin County Prison if he is able to obtain approval from prison officials.

Spanier was also granted approval to participate in a work release program while in prison.

Last year, Spanier lost an appeal of the misdemeanor charges, as a Superior Court in Harrisburg, Pa., rejected his claims that too much time had passed to charge him with child endangerment, that he wasn't legally obligated to care for the child and that he should not have been charged because he didn't directly supervise children.

The charges stem from evidence that he and other senior managers at the university chose to handle the complaint about Sandusky internally rather than sharing it with police or child welfare officials.

Spanier had been free on bail through Wednesday as he awaited the appeals process. 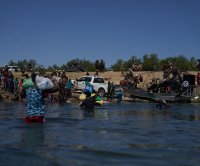 U.S. News // 13 hours ago
Border agents criticized for treatment of Haitian migrants in Del Rio, Texas
Sept. 20 (UPI) -- Images and videos taken by journalists and widely shared on social media show agents on horseback charging and herding migrants attempting to cross the Rio Grande, including an agent swinging his reins toward a migrant.