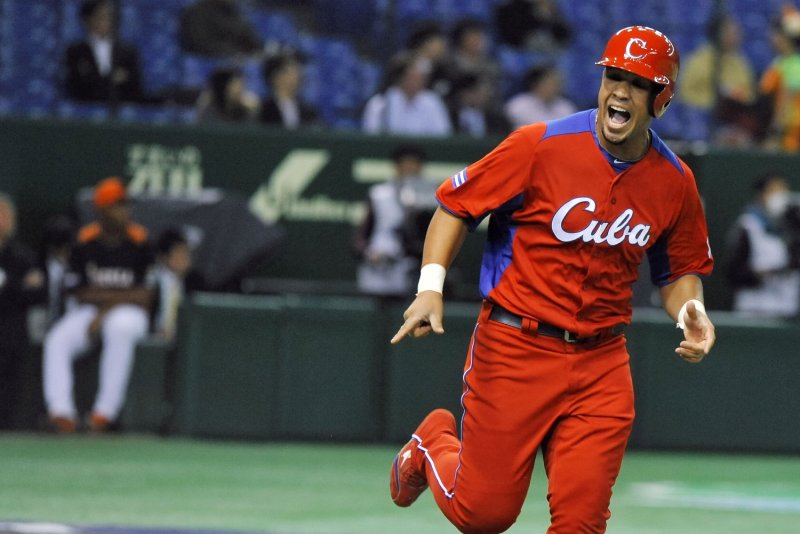 For Cuban baseball players to play in MLB, they first must defect to another country like Mexico or the Dominican Republic, a process that can be dangerous. File Photo by Keizo Mori/UPI | License Photo

April 8 (UPI) -- The Trump administration has canceled an agreement that would have allowed Cuban baseball players to play in Major League Baseball without having to give up their citizenship, senior administration officials said Monday.

Under the deal, the MLB would be permitted to scout and recruit Cuban baseball players without them having to undertake a risky defection to get to the United States. The players would receive 100 percent of their signing bonus, but the recruiting team would pay a fee to the Cuban baseball Federation.

The licensing fee is similar to one in place for MLB players from Japan, USA Today reported.

An unnamed senior Trump official told The Washington Post the deal, negotiated by the Obama administration, was scuttled four months after its implementation because licensing fees paid to the Cuban Baseball Federation were illegal.

National Security Council spokesman Garrett Marquis said the administration canceled the deal because it considers the Cuban Baseball Federation an entity of the Cuban government, which is under economic sanctions by the United States.

"The U.S. does not support actions that would institutionalize a system by which a Cuban government entity garnishes the wages of hard-working athletes who simply seek to live and compete in a free society," he tweeted.

"The Administration looks forward to working with MLB to identify ways for Cuban players to have the individual freedom to benefit from their talents, and not as property of the Cuban State."

RELATED Bird and the bees: Rangers pitcher harassed by swarm in bullpen

"The agreement with #MLB seeks to stop the trafficking of human beings, encourage cooperation and raise the level of baseball," the organization said. "Any contrary idea is false news."

Major League Baseball also said it supports the goal of the former agreement, "which is to end the human trafficking of baseball players from Cuba," the MLB said Monday.

Sen. Marco Rubio, R-Fla., who was opposed to the MLB deal, said it legalized the trafficking of the players.

"Because Cuba regime doesn't allow them to travel freely the only way Cuban baseball players can make it to the MLB is to escape," he tweeted. "Regime cut a deal with baseball to allow players to leave, but only if MLB pays them a ransom."

The announcement came about a week after Cuba released a list of 34 players it said were eligible to sign with Major League Baseball.

U.S. News // 2 hours ago
Costco brings back limits on toilet paper, other items due to panic buying
Sept. 24 (UPI) -- Discount retailer Costco says it's again limiting purchases for some items, including toilet paper and bottled water, due to supply chain issues and renewed demand amid COVID-19 surges nationwide.

U.S. News // 5 hours ago
Biden to host leaders of Japan, India, Australia in first in-person Quad Summit
Sept. 24 (UPI) -- President Joe Biden and three other world leaders will meet at the White House on Friday for the first-ever in-person Quad Leaders Summit, a gathering that was staged remotely almost seven months ago to address COVID-19.

U.S. News // 7 hours ago
Texas announces 2020 election audit of 4 counties
Sept. 24 (UPI) -- Texas has announced it is conducting an audit of the 2020 general election in four counties.

U.S. News // 10 hours ago
House approves $1B for Israel's Iron Dome missile system
Sept. 24 (UPI) -- The U.S. House of Representatives has approved legislation to give Israel $1 billion to replenish its Iron Dome defense system of missiles it used last Spring during renewed fighting with Gaza militants.