Pompeo: There will be 'devastating' consequences if Turkey attacks Syria

Secretary of State Mike Pompeo testifies on the Department of State budget request for FY2020, during a House Appropriations Committee hearing on Capitol Hill in Washington, D.C. on March 27, 2019. Photo by Kevin Dietsch/UPI | License Photo

epa07238703 Turkish Foreign Minister Mevlut Cavusoglu listens the joint statement following the consultations on Syria, at the European headquarters of the United Nations in Geneva, Switzerland, 18 December 2018. High-level representatives of Russia, Turkey and Iran meet with the UN Special Envoy for Syria on the situation in Syria. EPA-EFE/SALVATORE DI NOLFI

"Secretary Pompeo expressed support for ongoing negotiations regarding northeast Syria, while warning of the potentially devastating consequences of unilateral Turkish military action in the region," Palladino said in the statement.

The warning comes as Turkey has repeatedly threatened to attack the Kurdish-led American-backed Syrian Democratic Forces as it believes the Islamic State fighters are also far-left Kurdish militants who are affiliated with the Kurdistan Workers' Party, which Turkey has been fighting.

America, on the other hand, has supported the SDF in its fight against the Islamic State, even delaying the withdrawal of troops from Syria in order to ensure their protection.

Turkey's Foreign Affairs Ministry, however, balked at Palladino's description of the conversation between the two men, saying it was "obviously prepared before the meeting" was held.

"[It] contains matters that were not even raised during the said meeting," Ministry of Foreign Affairs Spokesman Sami Aksoy said, adding that similar issues have occurred in the past.

RELATED F-35s for Turkey on hold as U.S. approves sales for Australia, Norway

"Our alliance naturally requires that such statements are prepared with greater care, while avoiding to include matters that were not raised during meetings," he said.

Following the meeting with Pompeo, Çavuşoğlu said via Twitter that it was "constructive," without elaborating.

Earlier in the day, Turkey criticized U.S. policy in Syria, saying it didn't know what it was.

"No. And this is the problem," Çavuşoğlu said when asked about the United States' Syrian policy, Politico reported.

"I don't want to make comments about the internal methods of your country, but again, different positions, different statements coming from different institutions and departments in the United States," he said. "The State Department and defense, actually, as well as the military on the ground, [U.S. Central Command] and all that. Different positions. There is no clear strategy, this is the problem."

Çavuşoğlu said during the NATO summit that Washington and Ankara have created a joint task force to sort out this issue and he plans to meet this week with both Pompeo and national security adviser John Bolton.

U.S. News // 3 hours ago
COVID-19-related evictions expected to surge in U.S. after CDC ban expires
Aug. 2 (UPI) -- Millions of struggling Americans nationwide are now facing the prospect Monday of being evicted from their homes after a national ban that kept landlords from kicking them out expired over the weekend.

U.S. News // 3 hours ago
Foot Locker buys WSS, atmos for $1.1B to expand reach in U.S., Asia
Aug. 2 (UPI) -- U.S. shoe retailer Foot Locker announced on Monday that it's spending more than $1 billion to expand its reach in the United States and Asia. 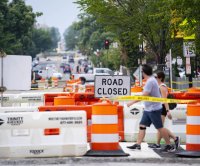 U.S. News // 19 hours ago
Kinzinger: Jan. 6 committee to issue 'a significant number of subpoenas'
Aug. 1 (UPI) -- Rep. Adam Kinzinger said he expects the select committee investigating the Jan. 6 riot at the Capitol to issue many subpoenas including against House Republican leader Kevin McCarthy and others who spoke to Donald Trump.

U.S. News // 22 hours ago
Severe storms to kick off August for Northeast
Aug. 1 (UPI) -- Cooler and less humid conditions are settling in across the Northeast but more storms are on the way to the region before the weekend is over.

U.S. News // 23 hours ago
COVID-19: Fauci warns 'things are going to get worse' amid Delta surge
Aug. 1 (UPI) -- Dr. Anthony Fauci on Sunday warned that COVID-19 infections "are going to get worse" as the Delta variant continues to spread rapidly, particularly among unvaccinated people, causing hospitalizations to rise.

U.S. News // 1 day ago
Man killed by multiple bee stings from 100-pound beehive, others injured
July 31 (UPI) -- One person was killed and several others were injured when bees from a 100-pound beehive stung people in an Arizona neighborhood.
Advertisement