The March 23 halt comes a little over a month since the Air Force first halted deliveries of the aircraft for the same reason -- foreign object debris in closed compartments.

By
Darryl Coote and Allen Cone 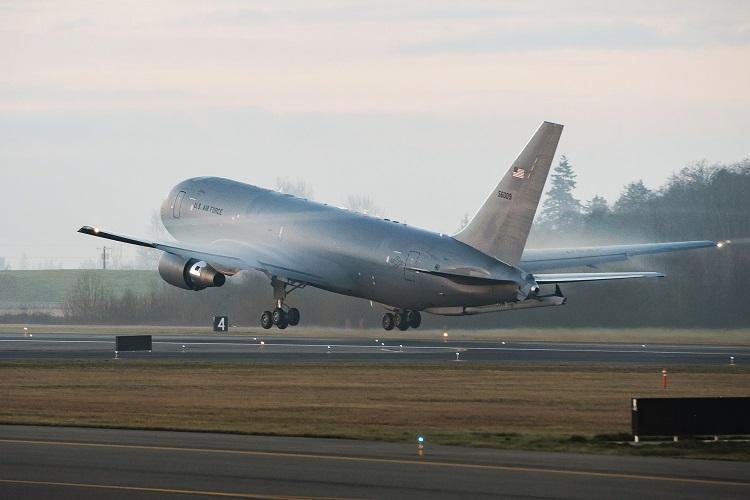 The first two KC-46 tankers were delivered by Boeing to the U.S. Air Force in January, at least two years later than expected. Photo courtesy of Boeing

April 3 (UPI) -- For the second time in one month, the United States halted accepting deliveries of Boeing's new refuelling air tankers due to "foreign object debris" found in closed compartments of the aircraft, the department's secretary said.

Air Force Secretary Heather Wilson told the House Armed Services Committee on Tuesday, "we actually stopped again the acceptance of the KC-46s because of foreign object debris that we found in some closed compartments," CNN reported.

"We've got corrective action in place, including [inspections] in some of those closed compartments to make sure that the production line is being run the way that it needs to be run.

Later in the day before the House Appropriations Defense subcommittee, Wilson elaborated that the issue was caused by a lack of "manufacturing discipline" on the assembly line.

"If you drop a wrench you have to find a wrench," she said. "You have to wipe down surfaces so you don't have pieces of aluminum that over time get in the midst of things and cause serious problems," Bloomberg reported.

The halt in deliveries is only the latest issue to arise concerning the $49 billion deal with Boeing that has seen multi-year delays and expenditure overruns.

On Feb. 20, the Air Force first halted deliveries of the aircraft also due to foreign object debris, including trash and industrial tools. Eight tools were found in aircraft under production at Boeing's facility, and two more in tankers delivered to the U.S. Air Force, according to an internal Boeing memo.

One week later, deliveries resumed after Boeing agreed to an additional inspections plan.

On March 11, a new Pegasus flew to Altus Air Force Base in Oklahoma -- the third KC-46 tanker delivered to the base, which the Air Force considers as the premier training location for the plane.

"Boeing is committed to delivering FOD-free aircraft to the Air Force," he said, referring to foreign object debris by its industry acronym. "Although we've made improvements to date, we can do better."

"We are currently conducting additional company and customer inspections of the jets and have implemented preventative action plans," Ramey said. "We have also incorporated additional training, more rigorous clean-as-you-go practices and FOD awareness days across the company to stress the importance and urgency of this issue. Safety and quality are our highest priority."

During the production process, the jets are supposed to be swept for any debris, especially anything metal. Otherwise, a loose object left inside a wall cavity or under a floor, for example, could damage equipment or cause an electrical short.

The KC-46 is built as an empty 767 airframe in Everett, Wash., then transferred to a facility at the south end of Paine Field called the Military Delivery Center. That's where the jet's military systems, including the refueling and communications equipment are installed.

In January, the first KC-46 was flown from Boeing's facilities to McConnell Air Force Base, Kan.