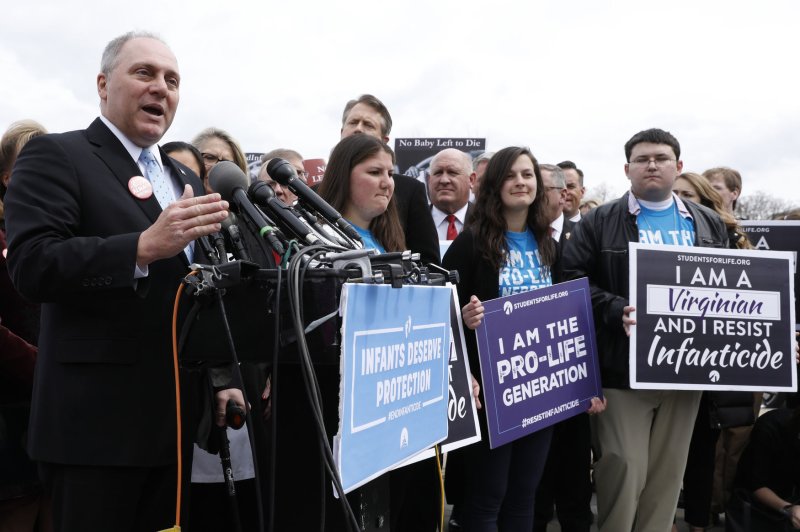 The congressman from Louisiana introduced a discharge petition, which requires an absolute majority of signatures in the House to go around Democratic leaders blocking a vote on the so-called Born Alive Abortion Survivors Protection Act. The discharge petition forces a vote when legislation is stalled in committee.

Scalise and Rep. Ann Wagner, R-Mo., introduced the legislation, which would imprison doctors for five years if they don't attempt to save the lives of infants born alive during attempted abortion procedures.

"No matter how you feel about abortion, we should be able to agree that when a baby is born alive and outside the womb, we should do everything in our power to keep it alive," the two lawmakers wrote in an op-ed published Tuesday by Fox News. "We cannot discriminate between children who are wanted and children who are unwanted; all newborns deserve the opportunity to lead a long, happy life."

The issue became a source of debate after Republicans took issue with comments Virginia Gov. Ralph Northam made during a radio interview in January.

Third trimester abortions are "done in cases where there may be severe deformities. There may be a fetus that's nonviable. So in this particular example, if a mother is in labor, I can tell you exactly what would happen," Northam told WTOP radio station. "The infant would be delivered. The infant would be kept comfortable. The infant would be resuscitated if that's what the mother and the family desired. And then a discussion would ensue between the physicians and the mother."

Northam, a pediatric surgeon, made the comments while discussing a proposed state law that would ease restrictions on third-trimester abortions in certain cases.

The Hill reported that Republicans have attempted to bring the bill to the floor for a vote more than 20 times using unanimous consent.

Speaker Nancy Pelosi of California "refuses to bring this bill up -- but you know what? The good news is all of us here today have a message for Nancy Pelosi: If you don't bring it up, we'll bring it up. And that's what this discharge petition is about," Scalise said during a new conference Tuesday.