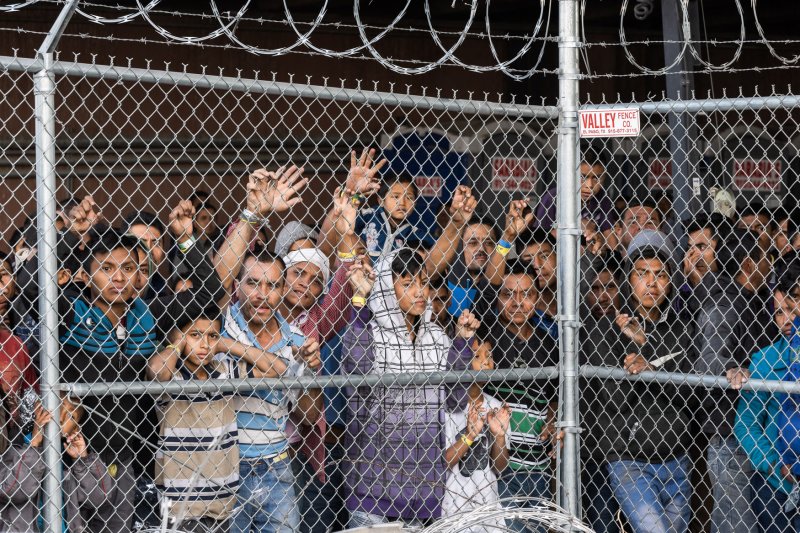 Migrants are shown being held for processing under the Paso del Norte Bridge in El Paso, Texas, on Wednesday. Photo by Justin Hamel/UPI | License Photo

Migrants walk to the Border Patrol processing center after crossing the Rio Grande River into the United States in El Paso, Texas, on Wednesday. Photo by Justin Hamel/UPI | License Photo

Migrants are held for processing under the Paso del Norte Bridge in El Paso, Texas, on Wednesday. Photo by Justin Hamel/UPI | License Photo

"Two weeks ago, I briefed the media and Congress that our immigration system was at breaking point," U.S. Customs and Border Protection Commissioner Kevin McAleenan said. "That breaking point has arrived this week at our border.

"CBP is facing an unprecedented humanitarian and border security crisis all along our southwest border and nowhere has that crisis manifested itself more acutely than El Paso."

U.S. Customs and Border Protection detains and processes undocumented migrants apprehended at the southern border. As of Wednesday morning, 13,400 migrants were in the agency's custody, overwhelming available bed space in its detention facilities.

The commissioner said detention space is overwhelmed because of massive arrivals of migrants each day. He said 4,000 migrants were apprehended along the entire southwest border Monday, calling it "the highest number of apprehensions on a single day since 2008."

"Tuesday, we broke that record again with 4,117 apprehensions," McAleenan said. "We are now on pace for 100,000 apprehensions of migrants in March, with 90,000 of those people crossing the border illegally between ports of entry."

McAleenan said the migrant flow has changed from mostly single Mexican men to Central American families, most of whom are seeking asylum. He said that inadequate detention facilities meant there was little his agency could do but detain, process and release these migrants with immigration court dates for asylum hearings.

"The increase in family units is a direct response to the vulnerabilities in our legal framework," McAleenan said. "Migrants and smugglers know they will be released and allowed to stay indefinitely pending immigration proceedings that could be many years out due to court orders that undermine the integrity of our immigration system. Unaccompanied children continue to arrive because they know they will be allowed to stay."

McAleenan had been scheduled to testify Wednesday at a congressional hearing about the 2020 budget request for the border security agency.

"We need additional resources to manage this flow," McAleenan said. The agency's 2020 budget request is $21 billion, an increase of more than $4 billion over the 2019 border security budget.

Instead of testifying to Congress about this budget, including a request for $5 billion for the border wall, the commissioner flew to El Paso to visit the city's Border Patrol stations, meet its mayor and representatives of the business community, and hear about its overwhelmed non-profit migrant shelter, Annunciation House.

As McAleenan spoke to the press, a handful of protesters gathered at a nearby corner under a giant mannequin of President Donald Trump and just yards away from the Border Patrol station under the Paso del Norte bridge that links El Paso to Ciudad Juárez, Mexico.

"We don't want you here," the protesters shouted. "The only crisis is Border Patrol violence."

Meanwhile in southern Mexico, a new caravan composed of Central Americans has set off on foot toward the U.S.-Mexico border.

More than 2,500 migrants are in the caravan, according to media reports. Most of the migrants are traveling in families and come from the Central American countries of Guatemala, El Salvador, Honduras and Nicaragua. A small group of Cubans also is part of the caravan.

On Tuesday, the caravan arrived in Huixtla in the southern Mexican state of Chiapas. The migrants are traveling on foot in extremely hot and humid weather with temperatures rising to 102 degrees. City authorities provided migrants with water and medical attention, but municipal police refused to allow them to enter Huixtla, a sharp departure from previous practice when migrants rested in the town center.

Mexican President Andrés Manuel López Obrador has said he wants to offer migrants work opportunities in his country so migrants do not travel to the U.S.-Mexico border.

For his part, U.S. border security chief McAleenan told the media in El Paso he is asking the Mexican government for more assistance to deal with the migrant influx.

U.S. News // 3 hours ago
Zalmay Khalilzad resigns as U.S. envoy for Afghanistan
Oct. 18 (UPI) -- Ambassador Zalmay Khalilzad has resigned from his post as the United States lead diplomat to Afghanistan following the late summer exodus of the U.S. military from the war-torn country.

U.S. News // 8 hours ago
Trump sues Jan. 6 committee to prevent release of White House records
Oct. 18 (UPI) -- Former President Donald Trump on Monday filed a lawsuit against the House committee probing the Jan. 6 insurrection in a bid to keep it from examining White House records related to the attack.