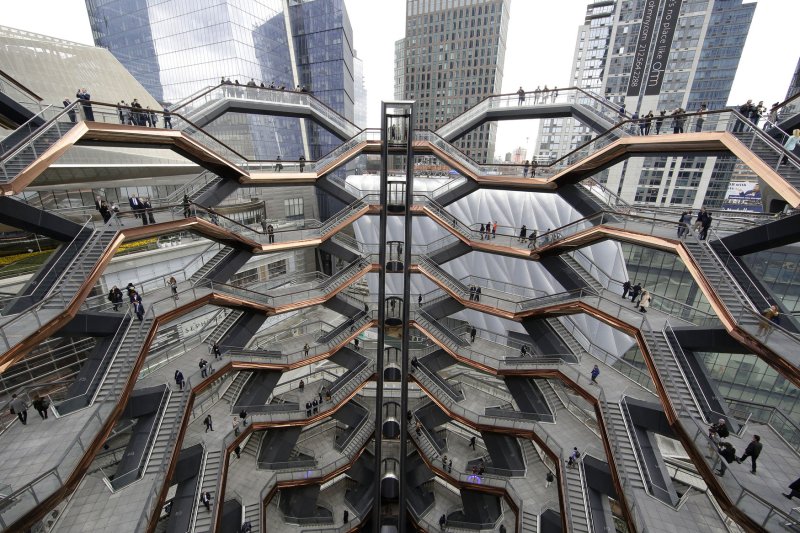 Crowds gathered Friday for the grand opening of the Hudson Yards project, including the massive 2,500-step Vessel sculpture that provides scenic views of Manhattan. Photo by John Angelillo/UPI | License Photo

Grand opening ceremonies are scheduled throughout the weekend that include concerts and other performances. This is phase one of a larger $25 billion project that is scheduled for completion in 2025.

"It's not every day you get your hands on 26 acres of virgin land, so to speak, and you can start with a blank sheet of paper and that's what we did," Jay Cross, president of Related Hudson Yards, which developed the project.

The crowning jewel is the 52-story skyscraper called 10 Hudson Yards. It officially opens May 31. The 150-foot Vessel is the centerpiece of the Hudson Yards Public Square and Gardens with 154 interconnecting staircases, 2,500 individual steps and 80 landings that provide views of Manhattan's West Side.

The project includes a mix of 1,300 new or permanently preserved affordable residential units. More residents means more traffic in the Holland Tunnel and the Lincoln Tunnel to the north.

Phase 2 of the project will include more towers, a school and other elements. By 2024, the project is expected to have more than 125,000 residents, visitors and office workers there each day.

Firefighters union President Gerald Fitzgerald said he is concerned there is no fire station in that area and firefighters already are "stretched thin."

Fitzgerald wrote a letter expressing his concerns to Mayor Bill De Blasio, but said he did not receive a response. He is particularly concerned about the 88-story residential tower called 15 Hudson Yards that will have 400 units.

Related Companies told Business Insider that it's been working closely with the Fire Department of New York, but it's ultimately a city decision.

"We don't control the siting of firehouses," the company said in a statement.

U.S. News // 1 hour ago
Former Army reservist convicted of being Chinese agent
Sept. 27 (UPI) -- A former U.S. Army reservist was convicted of acting within the United States as an illegal agent of the People's Republic of China, the Justice Department confirmed on Tuesday.

U.S. News // 8 hours ago
FEMA to Florida residents: Don't underestimate Hurricane Ian's strength
Sept. 27 (UPI) -- Evacuations have stepped up along the Florida Gulf Coast and Tampa Bay as Hurricane Ian intensifies to a Category 3 hurricane ahead of its expected landing in the Sunshine State.

U.S. News // 5 hours ago
Legal organization sues to stop Biden's student debt forgiveness
Sept. 27 (UPI) -- A nonprofit legal group that aims to fight "government overreach" sued the U.S. Department of Education on Tuesday, seeking to block the Biden administration's move to forgive up to $20,000 in student debt per borrower.

U.S. News // 9 hours ago
U.S. government funding proposal may be a non-starter
Sept. 27 (UPI) -- Energy proposals included in a continuing funding resolution by U.S. Sen. Joe Manchin, a Democrat representing West Virginia, could kill the progress of a measure meant to keep the federal government functioning.