The USGS reported that a magnitude-2.7 earthquake occurred Wednesday at 10:45 p.m. near Santa Rosa County.

According to the survey, the earthquake occurred at a depth of 5 kilometers or 3.1 miles.

Though weak, the geological survey said it was strong enough to be felt, with at least 27 people having reported their experience of the earthquake using a reporting tool called "Felt Report" on its website.

A significantly larger 5.9-magnitude earthquake was recorded off the Gulf of Mexico on Sept. 10, 2016, and was felt by residents throughout the state, the Orlando Sentinel reported.

The last earthquake to hit Florida registered at a magnitude-3.7 in 2016 near Daytona Beach, but it was caused by an explosion by the U.S. Navy.

The Florida Geological Survey said that earthquakes in the state are "extremely unlikely" as there are no tectonic plate boundaries in the area, but small tremors produced by other factors such as man-made explosions could produce tremors. 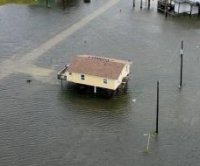