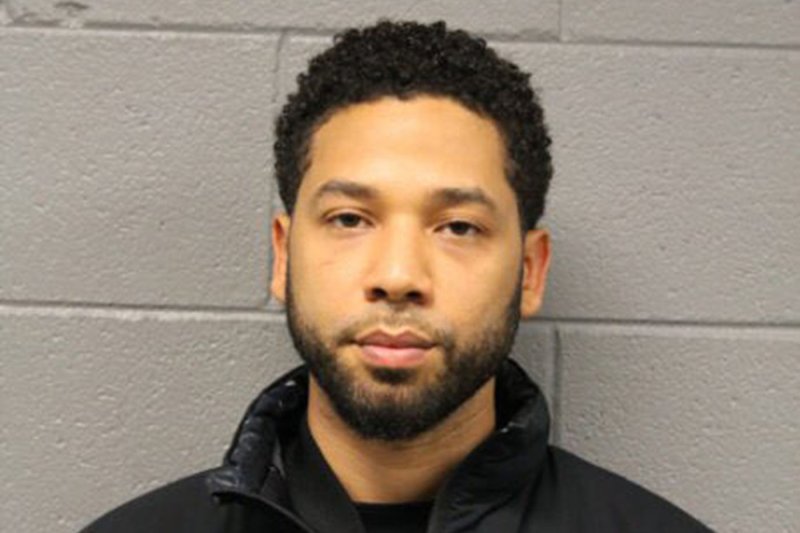 Feb. 21 (UPI) -- A Chicago judge released Empire actor Jussie Smollett on $100,000 bail Thursday after his arrest on charges of falsely reporting to police he was the victim of a hate-motivated attack.

Smollett's lawyers asked for their client to be released on his own recognizance, but Judge John Lyke balked, saying it was "totally inappropriate." He also ordered Smollett to surrender his passport and have no contact with the two brothers with whom he allegedly orchestrated the attack.

Earlier Thursday, Chicago police announced Smollett faces felony charges for disorderly conduct and filing a false police report. The charges stem from a Jan. 29 report in which Smollett, 36, said attackers poured what he believed was bleach all over his body and put a noose around his neck while making slurs about his race and sexuality.

Chicago Police Superintendent Eddie Johnson said Smollett orchestrated the attack with two men he knew -- brothers Obabinjo Osundairo and Abimbola Osundairo -- because he was unhappy with his salary on Empire. He also allegedly sent himself a racist, threatening letter as part of the scheme.

Johnson told reporters Smollett took advantage of the city's pain, anger and racism in a bid to promote his career. He said Chicago had embraced Smollett after the reported attack -- and he, in turn, "slapped" it in the face.

"I'm offended by what happened and I am also angry," he said. "Bogus police reports cause real harm. They cause harm to every legitimate victim. This publicity stunt was something Chicago didn't earn and certainly didn't deserve."

Smollett's attorneys denied the actor was complicit in the attack. They said in a statement he "enjoys the presumption of innocence, particularly where there has been an investigation like this one where information, both true and false, has been repeatedly leaked."

"Given these circumstances, we intend to conduct a thorough investigation and to mount an aggressive defense," they added.

The case will go to a grand jury. Subpoenas have been issued for the phone records of Smollett, his manager and others.

Police said Smollett paid the two brothers $3,500 to stage the attack and "drag Chicago's reputation through the mud." Detectives treated Smollett like a victim throughout the investigation, Johnson said, until they learned otherwise.

Johnson said the two brothers were paid to punch the actor while wearing gloves, and the scratches on his face were likely self-inflicted. Police believe he hoped the attack would be caught on a surveillance camera, but one nearby was not recording during the assault. One of the brothers had worked on the Empire television show and was an acquaintance of Smollett's.

"We have the phone records that clearly indicate that they talked to each other quite a bit," Johnson said.

The brothers were previously taken into custody as potential persons of interest and released after two days without charges.

It had been reported that one of the attackers said, "this is MAGA Country," a reference to President Donald Trump's Make America Great Again campaign slogan. On Thursday, Trump demanded an apology.

"What about MAGA and the tens of millions of people you insulted with your racist and dangerous comments!?" he tweeted.

"I only hope that the truth about what happened receives the same amount of attention that the hoax did," he said. "My concern is that hate crimes will be met with skepticism. There's no place for hatred in the city of Chicago."

U.S. News // 14 hours ago
Arizona judge reinstates 1864 abortion ban from before territory became a state
Sept. 23 (UPI) -- An Arizona judge on Friday ruled that an 1864 territorial law banning abortions should be reinstated, just a day before a new ban on abortions after 15 weeks of pregnancy was to take effect.

U.S. News // 1 day ago
Amtrak aims for net-zero emissions from passenger trains by 2045
Sept. 23 (UPI) -- Amtrak has pledged to achieve net-zero greenhouse gas emissions throughout its passenger rail service by 2045 with help from the Bipartisan Infrastructure Law.

Tropical Storm Ian strengthens over Caribbean; could hit Florida as a major hurricane