Feb. 17 (UPI) -- Five people are dead, including the gunman, after a hostage standoff at a home that lasted 12 hours, authorities said Sunday.

"When our officers arrived, they received fire from the suspect," Hayman said. "The suspect then retreated into his home."

Two children later were eventually released from the home and were being treated.

Around 2 p.m, the hostage situation ended and the unidentified suspect was arrested.

On Sunday, the Mississippi Bureau of Investigation said Nam Le, 34, was taken to a hospital, where he died from his injuries.

The victims also have not been identified.

The city police department was joined by the Jackson/Hinds County SWAT team, the Hinds County Sheriff's Office, the Mississippi Highway Patrol and the FBI.

The Mississippi Bureau of Investigations took over this case.

"It's just nothing like this before, nobody could tell us what was going on, but you just use your common sense," a neighbor told WJTV-TV. "But you know with so many police officers and so many different agencies, it's got to be something bad. Just like that, what you just heard. This does not happen in this neighborhood. It's quiet. We have good Clinton police presence patrolling."

U.S. News // 5 hours ago
'Drought is going to take a good kick in the pants'
Jan. 23 (UPI) -- Forecasters say the drought in California and the southwestern United States is about to take a beating as one storm after another is expected to bring copious amounts of rain to coastal areas. 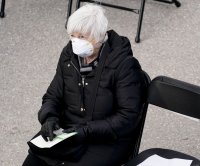