By
Jessie Higgins and Lucas Robinson 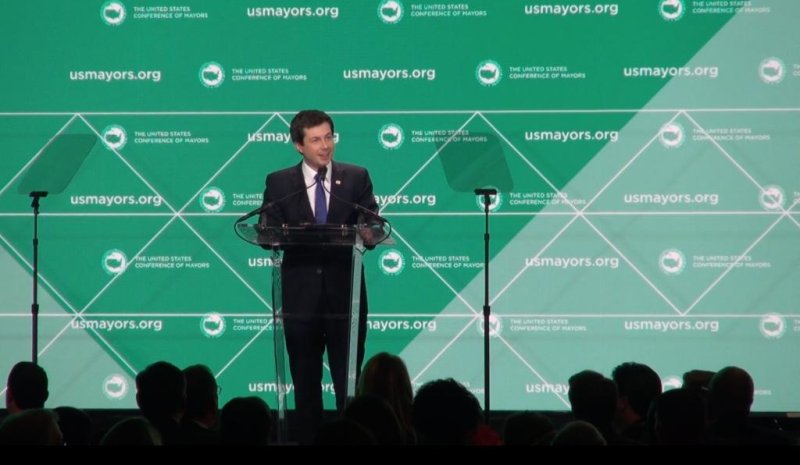 South Bend, Ind., mayor and presidential hopeful Pete Buttigieg speaks January 24 at the annual U.S. Conference of Mayors, where he announced his intention to run for president. Photo by Lucas Robinson/Medill News Service

EVANSVILLE, Ind., Feb. 6 (UPI) -- Pete Buttigieg, the openly gay, Democratic mayor of an Indiana city, is making a bid for the Democratic presidential nomination -- touting the message that the country cannot go backward.

"The reality is there's no going back and there's no such thing as again in the real world," Buttigieg said in an ad announcing his intention to run. "We can't look for greatness in the past."

Buttigieg announced he was forming a presidential exploratory committee Jan. 23, shortly before speaking at the annual U.S. Conference of Mayors.

At 37, Buttigieg is serving his second term as mayor of South Bend, Ind., a town of just over 100,000 people in the northern part of the state.

He's married. He's an Afghanistan war veteran. And he says the country is ready for a millennial president.

"Legitimate citizens are being excluded from voting," Buttigieg said. "We have an Electoral College that really takes away the voices of a lot of people in states like mine."

Indiana -- the state were Republican Vice President Mike Pence served as governor before the 2016 election -- is a red state. Its 11 Electoral College votes usually go to the Republican presidential candidate. Since 1940, the state voted Democratic only twice, once in 1964 for Lyndon B. Johnson, and again in 2008 for Barack Obama.

Buttigieg said that being a Democratic mayor "from the heart of the industrial Midwest" would be an asset in the White House because he understands Heartland values and has experience working across the aisle.

He shrugged off the possibility of personal attacks from Trump should he become the Democratic nominee.

"I grew up in Indiana," he said. "I'm gay. I'm used to dealing with bullies. I don't think that he's going to throw me off more than rocket fire did when I was in Afghanistan."

Besides election reform, Buttigieg said he would make combating climate change an integral part of his presidency.

Like many cities in the Midwest, South Bend has experienced increased flooding in recent years, which scientists say is a result of global climate change. The changing weather patterns are impacting farming, and forcing growers to adjust their practices.

"Most people in our party are looking for someone completely new, and I think I represent something different from the others," Buttigieg said. "I believe a perspective from a new generation, a perspective from being an executive in the heart of the industrial Midwest, solving problems and getting things done, is something that maybe national politics needs a little more of."

U.S. News // 16 hours ago
5 shot, 2 killed in shooting at Chicago party
May 15 (UPI) -- Three people were injured and two were killed in a shooting at a party on Chicago's south side early Saturday, police said.