Feb. 6 (UPI) -- The House intelligence committee voted in a closed hearing Wednesday to send testimony concerning the Russia inquiry to special counsel Robert Mueller, which could result in perjury charges.

The Democratic-controlled panel met Wednesday afternoon and approved sending the transcripts for the Justice Department probe. The records they approved to be sent to Mueller's office involve committee testimony from about 50 interviews in the case.

Mueller's investigators had access to the "substance" of the transcripts, but couldn't level perjury charges until they were transmitted by the committee, panel chairman Rep. Adam Schiff said. They have been undergoing a declassification review.

"Neither we nor the special counsel will tolerate efforts by any person to impede any investigation into Russia's interference in the 2016 election, nor to pressure a witness to withhold testimony from or mislead Congress," Schiff said this month.

The committee chair said he ultimately wants the testimonial transcripts released to the public.

Since May 2017, Mueller has charged 34 people, mostly Trump campaign officials and advisers, in the case. Ultimately, the probe is investigating whether the campaign of then-candidate Trump colluded with Russia to gain an advantage in the 2016 election and dig up dirt on Democratic candidate Hillary Clinton.

Asked Wednesday about the progressing Russia investigation and Schiff's promise of a deep investigation that could include Trump's personal financial dealings, the president was dismissive.

"He has no basis to do that. He's just a political hack," Trump said. "There would be no reason to do that. No other politician has to go through that. It's called presidential harassment, and it's unfortunate. And it really does hurt our country."

Trump has repeatedly called the Justice Department investigation a "witch hunt" and insists there was no collusion. In his State of the Union speech Tuesday night, the president again referred to the inquiry.

"An economic miracle is taking place in the United States and the only thing that can stop it are foolish wars, politics or ridiculous partisan investigations," Trump said. "If there is going to be peace and legislation, there cannot be war and investigation."

The House intelligence committee said it's already turned over statements made by Republican political operative Roger Stone, a longtime friend and aide to President Donald Trump. Stone was indicted Jan. 25 on seven criminal charges based on his testimony to the House committee. He pleaded not guilty and was released on bail.

"You have to be straight with Congress," Rep. Eric Swalwell, D-Calif., told ABC News. "He wasn't. And he's paying the price now. And I suspect he won't be the last."

U.S. News // 3 hours ago
Facebook allows users to ask Oversight Board to remove content
April 13 (UPI) -- Facebook on Tuesday announced a change that will allow users to petition its Oversight Board to have flagged content removed from the social platform.

U.S. News // 8 hours ago
Biden honors slain Capitol officer: 'When will defies fear, that is heroism'
April 13 (UPI) -- U.S. Capitol Police officer William "Billy" Evans, who was killed during an attempted building breach this month, is lying in honor Tuesday in the Capitol Rotunda. 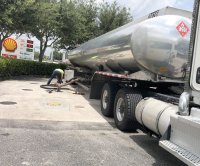 U.S. News // 4 hours ago
Rise in consumer prices in U.S. in March highest since 2012
April 13 (UPI) -- Consumer prices during the month of March increased more than most economists predicted, according to monthly figures released by the Labor Department on Tuesday.

U.S. News // 5 hours ago
Asian ride-share app Grab set for record $40B debut on Wall Street
April 13 (UPI) -- Singapore ride-hailing startup Grab announced on Tuesday that it plans to go public with the help of a special purpose acquisition company that would value the company at about $40 billion.