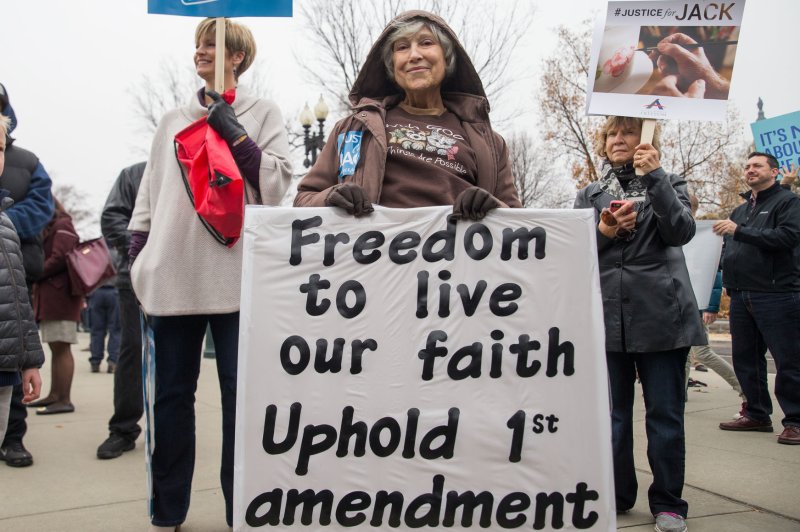 Feb. 5 (UPI) -- A group of scholars and experts has launched an effort to bridge the United States' diverse religions -- with faith that they have more in common than the narrow issues that divide them, starting with First Amendment freedoms.

The 16-article American Charter of Freedom of Religion and Conscience focuses on, among other things, civility, understanding, tolerance, dignity and respect for all. It has 75 signers since launching in November.

The idea was to create a "'21st century restatement of the American principles of freedom of religion of consciousness," said Brian W. Walsh, co-project director for the American Charter initiative.

Among the organizers' motivations: "concerns that the broad areas of agreement that we do have over freedom of religion and consciousness were getting swamped in the public debate by the narrow, contentious issues that end up eating up a lot of the attention," he said.

The First Amendment -- protecting the right for everyone to practice their faith openly -- was a natural, non-controversial, place to start.

"Where we can go to build our houses of worship, what we can say in public, whether a Native American can wear his or her religious garb to a public high school graduation, those are all things we agree on," Walsh said. "Lots of times in the public debate, there appears to be more disagreement than agreement."

The disagreements have been playing out in courtrooms across the country.

Last year, the U.S. Supreme Court ruled in favor of Colorado wedding cake baker Jack Phillips, who refused to bake a cake for a same-sex couple because of his religious beliefs.

The court did not rule on whether Phillips had a right to refuse the service, but that the Colorado Civil Rights Commission did not grant him a fair hearing. Several similar cases dealing with religious freedom issues are winding through the lower courts across the United States.

Meanwhile, evangelicals have pushed state governments to pass laws restricting abortion rights. Louisiana, North Dakota, Mississippi, Arkansas, Missouri and Kentucky have some of the toughest anti-abortion laws in the country.

New York this month passed a law allowing a woman to get an abortion after 24 weeks if her health is threatened or the fetus is not viable. Catholic and other spiritual leaders expressed outrage.

Walsh said the American Charter does not get into those debates.

The charter proclaims that the freedom of religion and conscience is fundamental to America's foundation, that people of all faiths should come together to defend it and conflicts of faith should not get in the way.

"Our collective failure to address our deep differences with civility and respect has undermined public support for religious freedom and poisoned the well for finding common ground," Charles Haynes, founding director of the Religious Freedom Center of the Newseum Institute, told UPI.

"The current divide in the culture wars over religious freedom helps to create ignorance, fear and intolerance. Signing the American Charter does not, of course, immediately restore civility or build trust across differences. But if we take our commitment to the First Amendment seriously, the American Charter can be a new beginning, a renewed commitment to do better by working together toward the common good," he said.

Haynes is one of the charter's signers, which include a broad cross-section of people from different faiths. They include Leith Anderson, president of the National Association of Evangelicals; Rabbi Michael G. Holzman of the Northern Virginia Hebrew Congregation; Imam Talib Shareef, president and imam at Masjid Muhammad -- The Nation's Mosque; Hannah C. Smith, a senior fellow at the International Center for Law and Religion Studies at Brigham Young University Law School; Joel West Williams, a senior staff attorney for the Native American Rights Fund; and Kit Bigelow, former director of external affairs at Bahá'ís of the United States.

Missing so far are prominent leaders of the Catholic Church in the United States, the United Methodist Church and Church of Jesus Christ of Latter-day Saints, among the largest congregations in the nation.

"The biggest challenge for people on both sides of the issue is that they may not sign because the charter doesn't state things the way they want," Walsh said. "We're trying to stay above the fray and not trying to resolve the most contentious issues other than to say that freedom of religion is one of the most foundational values of the First Amendment and our differences must be resolved with civility, mutual respect and respect the rights of all involved."

That encompassing view has brought attacks from the left and the right.

Cody Libolt wrote on the New Christian Intellectual blog that he took exception to religions he believes are "hostile" to Christianity.

"While Christians ought to care about equal rights for all, principled Christians should not lift even one finger to assist the agenda of groups explicitly hostile to Christianity or to the security of our nation," he wrote.

Frederick Clarkson of the left-leaning Rewire.News said the charter's call for "civility" is code for shutting down those calling for LGBT, abortion rights and church-state separation.

"Part of the reason why the charter initiative appears to be fizzling may be because people are not only increasingly skeptical of appeals to civility that tend to mute advocates for social justice ... but because project leaders have not been friends of traditional approaches to church-state separation, having prominently led a war of attrition against Christian denominations that support it."

Walsh said the charter respects the right for religions to have a civil debate about their differences, yet recognizing that protecting freedom of religion and conscience protects all of their interest. He said he hoped the charter can be an educational tool in showing how people of different faiths can support each other and flourish.

"Granting full rights of freedom of religion and conscience is not the same as promoting," Walsh said. "That distinction has to be made. Some have suggested that having an equal playing ground is somehow a way of promoting that faith. I think education is the key."

U.S. News // 6 hours ago
FDA panel recommends Pfizer COVID-19 vaccine for kids 5-11
Oct. 26 (UPI) -- The vaccines advisory committee to the Food and Drug Administration on Tuesday voted to recommend that Pfizer's COVID-19 vaccine be approved for children between 5 and 11 years old.

U.S. News // 8 hours ago
Biden pledges $100M to Southeast Asia bloc to reach 'challenges of 21st century'
Oct. 26 (UPI) -- At a summit Tuesday with a unified bloc of 10 Southeast Asian nations, President Biden announced a $100 million initiative that he said is a measure of support in the face of growing Chinese influence.

U.S. News // 10 hours ago
'Wildcard' this winter brings uncertainty for California's water situation
After a scorching summer, experts say it would take 7 to 10 inches of rainfall to get the soil damp enough to provide runoff to depleted reservoirs, such as Sonoma County's Lake Mendocino.
Advertisement