Because drones are barred around the Atlanta stadium, the firm has been authorized to use a new radar system it says can detect the undetectable.

Drones have been outlawed in airspace around Mercedes-Benz Stadium in Atlanta from Thursday to late Sunday night after the Super Bowl. Photo by David Silpa/UPI | License Photo

Feb. 1 (UPI) -- While the New England Patriots and Los Angeles Rams will fill the Atlanta air with footballs Sunday, security officials have declared a 30-mile no-fly zone for drones around the stadium.

To that end, Echodyne, a startup backed by Microsoft founder Bill Gates, will use what it considers revolutionary technology to spot any drones in the sky, since they're often too small to be spotted by conventional radar.

The company has been granted special authorization by the Federal Communications Commission to allow it to roll out experimental radar around Mercedes-Benz Stadium that can alert security if an unauthorized drone enters the area.

Drones are a real concern for the NFL and security at large events. A drone sighting, for example, at London's Gatwick Airport last month forced authorities to shut down air traffic there for several hours.

"I want to remind people that the Super Bowl is a no drone zone," Cathy Lanier, chief security officer of the NFL said during a news conference Wednesday. "We've tried to have messages as loud and clear as possible. ... Drone operators could face civil penalties and potential criminal prosecution in violation of these flight restrictions."

Echodyne's radar could play a big line in that defense on Sunday. Leo McCloskey, vice president of the startup, told UPI he could not disclose which agency would use the system, but said the firm needed the FCC waiver to scan at such a high-security event.

"This is what the radar ideally can be used for," McCloskey said. "The reason we made the radar we do is because of the growth in the drone market. There are a lot more things in the air, sophisticated machines."

Echodyne uses so-called metamaterials, composite materials with complex, repeating structures, that can manipulate electromagnetic waves and steer radio beams with fine precision. And that might be useful in a world where drones are sometimes being used for nefarious purposes.

In 2016, the Pentagon said Islamic State militants had begun using small drones armed with explosives to attack U.S. and Kurdish fighters in Iraq. The year before, a Defense Department employee crashed a drone into the White House. He said he'd been drinking.

The U.S. military has similar technology, but Echodyne said its radar system does not require physical phase shifters. McCloskey said that can dramatically drop the price of the technology to the point of commercial availability.

"We are really the first company to bring military radar capability ... into the commercial market in a way that mirrors the military-like performance," McCloskey said.

While law enforcement officials have not yet specifically mentioned Echodyne's technology, they did stress they'll have a watchful eye on the skies at Sunday's NFL championship game, even though the teams will play in an indoor stadium

The Federal Aviation Administration said its 30-mile no-drone-zone radius around the stadium started Thursday and will continue through Sunday.

McCloskey said not only can Echodyne's technology spot troublesome drones, it can also help the flying machines become safer by looking out for them. Echodyne technology will also be used soon to aid driverless cars, he said.

For now, Echodyne hopes its drone-spotting radar will help law enforcement play better defense than either the Patriots or Rams in Super Bowl LII.

"There are places that need to be aware of when those machines are flying nearby," McCloskey said. "And if they are trying to advance across certain perimeters."

U.S. News // 1 hour ago
Pending home sales dip slightly in October, easing off on hot pace
Nov. 30 (UPI) -- Pending sales in the U.S. housing market declined slightly for a second consecutive month in October, signaling buyers may be reaching a limit on what they can afford, updated data showed Monday. 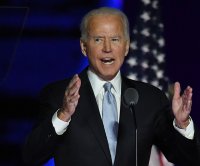 U.S. News // 3 hours ago
Supreme Court to hear arguments on Trump's plan for census count
Nov. 30 (UPI) -- The U.S. Supreme Court will hear arguments from the Trump administration Monday on why undocumented immigrants should not be counted in the census report.

U.S. News // 7 hours ago
Moderna to seek FDA approval for COVID-19 vaccine
Nov. 30 (UPI) -- U.S. biotech firm Moderna said Monday it will seek an emergency use authorization from U.S. regulators for its COVID-19 vaccine candidate after further clinical trials confirmed it is 94% effective.