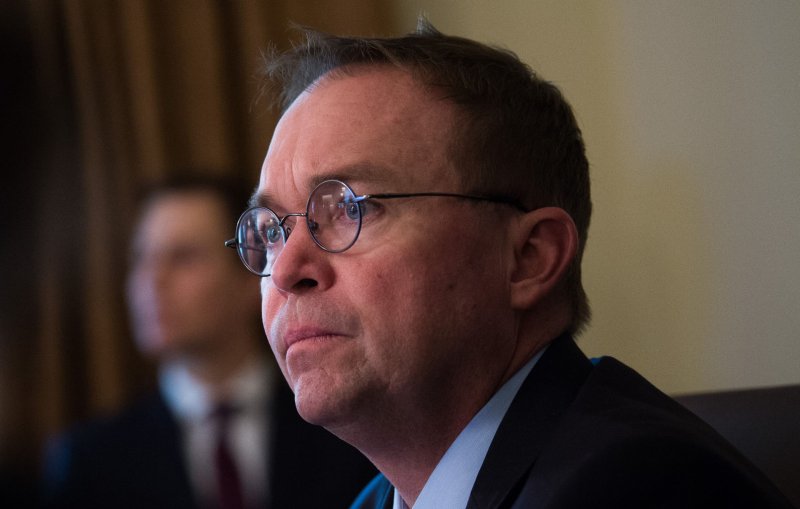 Jan. 27 (UPI) -- White House chief of staff Mick Mulvaney said Sunday that President Donald Trump would be willing to shut down the government again to acquire funding for an expanded border barrier.

Appearing on CBS' Face the Nation two days after Trump signed a bill to reopen the government for three weeks, Mulvaney said he believes Trump would move toward another shutdown if he can't reach a deal with Congress to secure $5.7 billion for 215 miles of new and ravamped border along the U.S.-Mexico border.

"He is willing to do whatever it takes to secure the border. He does take this very seriously. This is a serious humanitarian and security crisis," Mulvaney said of Trump.

Mulvaney added that the White House is still in negotiations with Congress and Trump "doesn't want to shut the government down" and would prefer to secure the funding "the way that things are supposed to get fixed with our government, which is through legislation."

The bill signed Friday ended the 35-day shutdown, the longest in U.S. history, and will allow for a bipartisan conference committee in Congress to review Department of Homeland Security requests for border security.

Mulvaney said Sunday that part of the reason the government was reopened was to "take the Democrats at their word" that they would be willing to negotiate the terms of a border barrier deal.

"There were many, many Democrats, both rank and file and some lower levels of leadership, [who] would come to us and say, 'Look, we happen to agree with you on border security," he said. "Some of them were even very public about it."

Mulvaney also stated Trump hopes to obtain funding for the barrier "the right way" but would still consider a shutdown or declaring a national emergency to achieve his goal.

On Saturday, Senate Democratic Leader Charles Schumer spoke out against the possibility of any further government shutdowns under Trump.

"I hope that President [Trump] has heard our federal workers and their families. I hope he's heard Democrats in Congress," Schumer wrote on Twitter. "No more Trump shutdowns. No more holding federal workers hostage."

A Wall Street Journal/NBC News poll released Sunday showed that Trump's approval rating remained steady throughout the shutdown, despite more Americans placing the blame on him rather than Congress.

The survey conducted over a four-day period that ended on Wednesday -- two days before the end of the shutdown -- found that 43 percent of respondents approved of Trump's performance and 54 percent disapproved, the same percentage as a survey taken 10 days before the shutdown began in December.

The poll interviewed 900 adults and has a margin of error of 3.27 percentage points.

In an ABC/Washington Post poll released Friday, Trump's approval rating was 37 percent and disapproval was 58 percent among 1,001 adults interviewed from Monday through Thursday. The margin of error is 3.5 percentage points.

In both polls, a majority of those surveyed placed blame for the shutdown on Trump.

In the Wall Street Journal/NBC poll, 50 percent of respondents blamed Trump for the shutdown, while 37 percent blamed Democrats and Congress.

Fifty-three percent in the ABC News/Washington Post poll blame Trump and Congressional Republicans for the shutdown, same as two weeks ago.

U.S. News // 13 minutes ago
Capitol Police IG says dept. needs reform, culture change after Jan. 6 attack
April 15 (UPI) -- Officers were not prepared to deal with the mob that attacked the U.S. Capitol on Jan. 6, despite warnings of potential violence, according to congressional testimony from the Capitol Police inspector general.

U.S. News // 39 minutes ago
Disneyland begins selling tickets for park's reopening this month
April 15 (UPI) -- Disneyland is still a couple weeks away from its grand reopening, but tickets to return to the family resort for the first time in more than a year went on sale Thursday.

U.S. News // 4 hours ago
Millions of U.S. workers still must make tax payments by deadline Thursday
April 15 (UPI) -- While most Americans don't have to file their taxes by Thursday, which is the traditional Tax Day in the United States, there are millions of people who still have to make the April 15 deadline.

U.S. News // 7 hours ago
House panel approves bill to pave way for slavery reparations
April 15 (UPI) -- A House committee approved legislation late Wednesday to pave the way for reparations to ancestors of enslaved Black Americans, though the bill has an uphill battle to become law.

U.S. News // 11 hours ago
China is working to undo global norms in its favor, says U.S. intelligence community
April 14 (UPI) -- U.S. intelligence officials briefed the Senate on challenges the United States faces in protecting the homeland, including the increasing competition from China.