The reflecting pool is seen frozen as the Washington, D.C., region is hit by dangerously cold weather with wind chills below zero Monday. Photo by Kevin Dietsch/UPI | License Photo

A family shields themselves from cold weather as the D.C. region is hit by dangerously cold weather with wind chills below zero Monday. Photo by Kevin Dietsch/UPI | License Photo

A woman walks in cold weather as the D.C. region is hit by dangerously cold weather Monday. Photo by Kevin Dietsch/UPI | License Photo

Jan. 21 (UPI) -- The weather system that dumped heavy snow over the Midwest and Northeast this past week into the weekend has been blamed for six deaths across the country.

The storm, which began last week on the West Coast, dumped feet of snow across the country as it made its way eastward over the weekend.

In Middletown, Conn., an Eversource subcontractor was killed Sunday while completing work on a power line when a tree top fell on him, WVIT-TV reported.

The Kansas Department of Transportation said one of its equipment operators died about 6 a.m. Saturday while removing snow off U.S. Highway 69 in Johnson County. The crash was under investigation, officials there stated. Kansas Highway Patrol identified the driver as Stephen Winder, 25, of Paola, Kan. The patrol report said Winder's vehicle turned over after leaving the roadway and going into the grass. The vehicle landed on top of him after he was ejected.

Over the weekend, a 15-vehicle pileup snarled traffic on Interstate 55 in Missouri, at least five counties in northern Ohio along the Great Lakes area issued Level 3 snow emergencies telling most vehicle traffic to stay put, and the Massachusetts Department of Transportation reduced speed on the Massachusetts Turnpike to 40 mph because of hazardous conditions.

The storm played havoc with air transportation as well. More than 4,600 flights were canceled in the United States due to storm-related conditions, including 2,165 on Saturday, USA Today reported.

According to FlightAware.com, more than 600 flights were canceled Monday morning with more than 1,000 other flights delayed.

The Port Authority of Allegheny County resumed all regular routes Monday morning, one day after it shut down all train transportation in and out of Pittsburgh due to overhead power lines being frozen over.

The National Weather Service reported temperatures in most of the Northeast will fall 20 degrees below normal Monday because of frigid air dropping down from Canada. The chilly air crossing the Great Lakes will fuel lake-effect snow along with upslope snow over the central Appalachian mountains.

Temperatures will start to rise back to normal once the arctic high-pressure system moves off the East Coast.

In the meantime, a new upper-level trough that had been dumping widespread rain in Northern California is expected to cross the Rocky Mountains Monday to become the next winter storm. This new storm will reach the northern Plains and Great Lakes on Tuesday, with up to 8 inches of snow expected in some areas of the Midwest.

The system is expected to reach the New England area Wednesday morning, bringing freezing rain to the central Appalachians.

U.S. News // 50 minutes ago
2 federal marshals wounded in NYC gun fight; fugitive dead
Dec. 4 (UPI) -- Two federal marshals were injured in a shootout in New York City on Friday when they attempted to capture a fugitive from Massachusetts, authorities said. 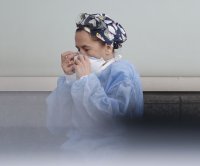