A window washer fell to his death Wednesday at the 64-story Trump International Hotel, which is on the Las Vegas Strip. Photo courtesy Trump Organization

Dec. 12 (UPI) -- A window washer fell to his death from the 64-story Trump International Hotel in Las Vegas on Wednesday.

The unidentified worker was pronounced dead at University Medical Center after the accident occurred about 12:30 p.m. at the luxury hotel, condominium and timeshare on the Las Vegas Strip, the Metropolitan Police Department said.

It was not known from which floor or the side of the building that the victim fell, police said.

One man told KLAS-TV the worker swung around the corner of the tower.

A crisis support volunteer was at the scene "to provide emotional and practical support to several individuals who witnessed the fatal fall earlier today," the Las Vegas Trauma Intervention Program said in a post on Twitter.

The man was not an employee of the hotel, the Review-Journal reported.

The golden-glass building, which opened in 2008, has 1,282 rooms, according to the hotel's website. At 640 feet, it is the third-tallest completed structure in Las Vegas, according to worldatlas.com.

"We are deeply saddened to learn of the incident today," Trump International officials said in a statement. "We are working diligently with the owner of the third-party company to investigate the details. Our thoughts and prayers are with the victim and his family."

U.S. News // 59 minutes ago
Despite differences, negotiators optimistic for COVID-19 relief bill
Aug. 7 (UPI) -- Republicans and Democrats say they're making progress, but still aren't in agreement on the next COVID-19 relief bill as a self-imposed deadline looms Friday.

U.S. News // 8 hours ago
Justice Dept. charges ex-Citgo executive with bribery
Aug. 7 (UPI) -- The Justice Department has charged a former Citgo executive with accepting more than $2.5 million in bribes from businessmen seeking contacts with the oil refiner and its Venezuelan parent company.

U.S. News // 10 hours ago
Trump admin to send federal troops to Memphis, St. Louis
Aug. 6 (UPI) -- The Trump administration announced federal law enforcement officers will be sent to Memphis and St. Louis to stamp out violent crime in the cities. 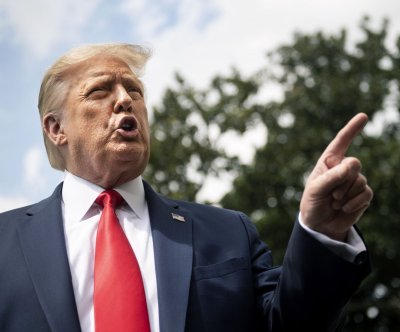