Dec. 6 (UPI) -- Tennessee carried out its second electrocution of the year with the execution of David Earl Miller on Thursday.

The 61-year-old died at 7:26 p.m. after the Supreme Court declined his request for a stay of execution. Earlier in the day. Gov. Bill Haslam also said he would not stop the process after Miller's legal time asked for mercy.

Miller's lawyers said he had "severe mental illness" when he murdered Lee Standifer, a 23-year-old mentally disabled woman, in 1981. In two separate trials, Miller, now 61, was convicted of murder. Standifer was beaten to death with a fireplace poker and stabbed several times. She was found bound and naked in a yard.

Miller's attorney filed a clemency application that said his client's abusive childhood and mental state at the time put him "far outside that group of offenders who are the worst and for whom the death penalty is reserved."

Earlier in the month Miller, along with three other death row inmates sued to be killed by firing squad, which is not one of Tennessee's approved methods of execution. The suit said a firing squad would be faster and less painful than lethal injection or electrocution.

Miller's lawyers argued the state's current three-drug lethal injection drug cocktail -- which includes midazolam to leave the inmate unable to feel pain, the paralytic vecuronium bromide and killing agent potassium chloride -- is not effective and tortures the inmates in a death that could take more than 15 minutes.

Supreme Court Justice wrote the dissenting opinion in the denial of Miller's stay.

"Tennessee is scheduled to electrocute David Miller tonight. Miller is the second inmate in just over a month who has chosen to die by the electric chair in order to avoid the State's current lethal injection protocol." she wrote.

"Both so chose even though electrocution can be a dreadful way to die. They did so against the backdrop of credible scientific evidence that lethal injection as currently practiced in Tennessee may well be even worse."

Tennessee used the electric chair for the first time since 2007 on Nov. 1 with the execution of Edmund Zagorski. 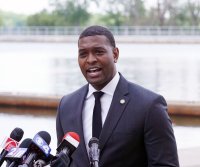