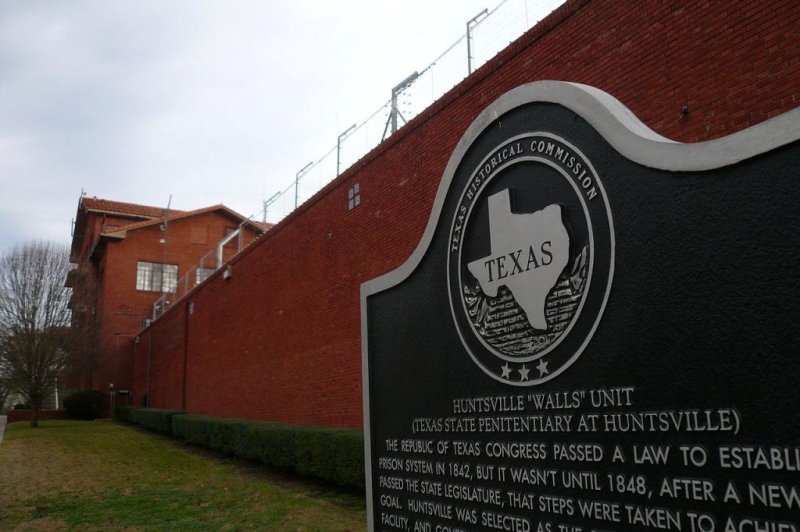 Robert Moreno Ramos was executed by lethal injection Wednesday at the Huntsville penitentiary in Texas. Photo by Mark Britain/Wikimedia Commons

Nov. 14 (UPI) -- A Mexican citizen was executed Wednesday night in Texas with a lethal injection for the sledgehammer deaths of his wife and two children in 1992.

Robert Moreno Ramos, 64, died at 9:36 p.m.,11 minutes after being injected with powerful sedative pentobarbital, The Monitor newspaper reported from the Huntsville penitentiary.

Ramos was the state's 11th execution this year and the 21st in the United States.

His attorney, Danalynn Recer filed a stay of execution to the U.S. Supreme Court hours before the execution scheduled for 6 p.m. The plea was denied shortly before 9 p.m.

Ramos was found guilty and sentenced to death in March 1993.

"Justice had been delayed in this case for over two decades," the Hidalgo County District Attorney's Office in a statement late Wednesday. "We hope that the sentence brings peace to the family of the victims."

Ramos was convicted for the February 1992 killings of his wife, Leticia, 42, and their two children, Abigail, 7, and Jonathon, 3.

Ramos beat the family members with a miniature sledgehammer and buried them under their Progreso home, according to trial evidence.

Ramos was arrested after he was picked up on a traffic warrant.

"I am very thankful for all the hard work the Mexican consulate put in a fight over my death sentence if there was a reason or not," he said before being injected. "I am thankful for the humane treatment that I was given here at the two prisons that I was at. I am getting my gold watch that it took the governor 30 years to forge. Thank you God, Lord send me a chariot. I'm ready."

According to the Vienna Convention on Consular Relations, when an immigrant is arrested and held in detention, he has the right for the consulate to be notified so that the government can provide legal representation.

"Any death sentence carried out in contravention of a government's international obligations amounts to an arbitrary execution," the U.N. Human Rights Office of the High Commissioner said in a statement. "We call for his death sentence to be annulled and for Mr. Ramos Moreno to be re-tried in compliance with due process and international fair trial standards."

In 2003, the Mexican government combined his case against the United States with more than 50 other Mexican immigrants sentenced to death without consulate-sponsored representation. The International Court of Justice in The Hague, Netherlands, determined in 2004 that the U.S. government had violated the treaty.

The Texas Court of Criminal Appeals dismissed his appeal and the Supreme Court denied a review of the decision.

U.S. News // 7 hours ago
State Department offers $10 million reward for ransomware hackers
Aug. 12 (UPI) -- The State Department said Thursday it is offering a reward of up to $10 million for information leading to the unmasking and location of five individuals with connections to the notorious Conti ransomware group.

U.S. News // 9 hours ago
House expected to pass Inflation Reduction Act on Friday, send it to Biden's desk
Aug. 12 (UPI) -- The House is expected to pass the Inflation Reduction Act Friday, almost a week after the Senate narrowly approved the legislation that aims to invest billions in climate change, tax and other economy-oriented efforts.
Advertisement