President Donald Trump gets a sea of hands wanting to ask questions Wednesday during a press conference at the White House a day after the nationwide midterm elections. Photo by Ken Cedeno/UPI | License Photo

Nov. 7 (UPI) -- President Donald Trump said Wednesday Republicans "defied history" with election wins in the Senate, and that he's hopeful to work with a Democrat-controlled House of Representatives.

Trump made the remarks Wednesday afternoon in a news conference at the White House. He touted GOP gains, saying 9 of the 11 candidates he campaigned for won their seats -- and overcame "very hostile media coverage."

"History will see what a good job we did in the final couple of weeks," he said.

RELATED Trade, infrastructure will benefit from Democrats' control of House

"When it comes to healthcare, all politics is personal. Voters delivered a resounding mandate about medicare, medicaid and preexisting conditions," Pelosi told reporters Wednesday. "We will strive for bipartisanship. We believe we have a responsibility to seek common ground. Where we can, we will stand our ground."

Trump pointed to various races as achievements for his administration, including Mike DeWine winning the Ohio governor's race after discouraging poll numbers. If the midterm vote was a referendum on the Trump administration, he said he feels "well received" by the country.

"Just look at the results," he said. "I went up there and did a rally and they have now a great governor."

Republicans gained at least two seats in the Senate and might get up to four. Trump said it shows Americans support low taxes, low regulations, low crime and strong borders. He also said if there's bipartisan cooperation, Congress can pass a "tremendous amount of legislation."

The president named several Republican candidates who didn't "embrace" him or have his support. Most of them lost.

The GOP won some toss-up races in state gubernatorial elections and expanded its majority in the Senate, while ceding control of the House.

"We had to jump over gerrymandered lines all over the country," Pelosi said. "It's about the grassroots operations. All of these groups that care about healthcare."

The new Democratic majority could lead to new inquiries into Trump's administration on issues like Russia and his tax returns. He told reporters he won't release the returns because he's under audit.

"If the Democrats think they are going to waste Taxpayer Money investigating us at the House level, then we will likewise be forced to consider investigating them for all of the leaks of Classified Information, and much else, at the Senate level," Trump tweeted earlier. "Two can play that game!"

Pelosi said her party's goal is to unify the country, but didn't rule out additional Trump investigations.

"We have a responsibility for oversight," she said.

Trump said he would support Pelosi as the Democrats' House leader, adding that she shares a love for the United States and is a hard worker.

"I'm one that really likes free speech. I am a big believer," he said. "When you start regulating a lot of bad things can happen. I would certainly like to talk with the Democrats if they want to do that."

One reporter asked if Trump plans to ask Vice President Mike Pence to be his running mate again for 2020. Trump jokingly asked Pence, who was in the room, to raise his right hand and swear to it. He said Pence said "yes."

Trump also shouted down several reporters in the room on some questions, saying they were "rude."

I'm speaking with reporters live at the US Capitol in the wake of House Democrats' victory last night. #DemsTakeTheHouse https://t.co/r3IzkViPMD

Florida Democratic Senator Bill Nelson supporters react after the announcement of Ron DeSantis defeating Andrew Gillum for governor of the state of Florida at the Nelson watch party in Orlando, Fla. The results of the Bill Nelson, Rick Scott senator race is still pending. Photo by Gary I Rothstein/UPI | License Photo

McCaskill leaves the stage with her family. Photo by Bill Greenblatt/UPI | License Photo

House Minority Leader Nancy Pelosi, D-Calif., is joined by House Democrats as they arrive to speak to volunteers and supporters. House Democrats will be in the majority in the next Congress, and Republicans retained control of the Senate in the 2018 Midterm Elections. Photo by Mike Theiler/UPI | License Photo

Florida residents cast their ballots at a fire station in Miami. Photo by Gary I Rothstein/UPI | License Photo

Florida residents line up to cast their ballot. Photo by Gary I Rothstein/UPI | License Photo

Ocasio-Cortez, 29, casts her vote. If she wins, she will be the youngest woman in Congress. Photo by John Angelillo/UPI | License Photo

A woman shows a young boy how to fill out a ballot as she votes in the 2018 midterm elections at Loudon County High School in Leesburg, Va. Photo by Kevin Dietsch/UPI | License Photo

A voter is seen through a window at a polling location for the midterm elections in Leesbugh, Va. Photo by Kevin Dietsch/UPI | License Photo

A voter fills out his ballot for the midterm elections. Photo by Kevin Dietsch/UPI | License Photo

Across the United States, 435 seats in the House and 35 in the Senate are being settled Tuesday. Also, 36 gubernatorial races will be determined. Photo by Kevin Dietsch/UPI | License Photo

A woman fills out her ballot in Virginia. Photo by Kevin Dietsch/UPI | License Photo
0 of 0 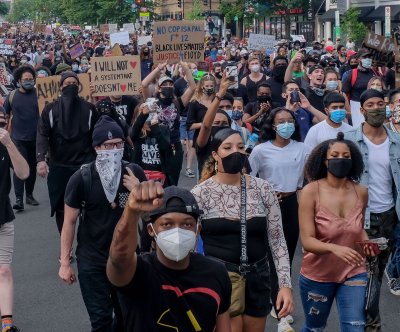 U.S. News // 18 hours ago
Brazil, Mexico coronavirus deaths, cases climbing exponentially
May 31 (UPI) -- The number of deaths and cases in two Latin American nations -- Brazil and Mexico -- are climbing exponentially as other places in the world, including Europe and Asia, are reporting data at a fraction from weeks ago.

U.S. News // 23 hours ago
Thunderstorms to rumble around 'ring of fire' this week
May 31 (UPI) -- A swath of stormy weather will trace the periphery of a heat wave in parts of the U.S. this week. Residents all the way from the northern Plains to the mid-Atlantic and perhaps even the Northeast will have to be on the lookout for the unsettled weather.