Florida votes to restore voting rights to some felons

Florida residents cast their ballot on Election Day at a Miami fire station. Photo by Gary I Rothstein/UPI | License Photo

Nov. 6 (UPI) -- Florida approved a constitutional amendment Tuesday to restore voting rights to more than 1.4 million people who were convicted of felonies.

Florida's Amendment 4 easily passed despite requiring 60 percent approval per state constitution rules. The law will restore voting rights to all felons --- with the exception of those convicted of murder or sex offenses -- who have served their prison or parole sentences.

Desmond Meade, president of Floridians for a Fair Democracy and a pivotal figure in the effort to get Amendment 4 on the ballot, celebrated the result.

"We showed that every ballot cast was a ballot cast with love," Meade told the Orlando Sentinel. "We showed what can happen when we come together along the lines of humanity and reach each other where we're at. That's what happens when we transcend partisan lines and bickering, when we transcend racial anxieties and when we come together as God's children. That's what happens."

Among the other amendments across the country that were called before midnight EST on Tuesday, Alabama voters approved an amendment that changes the state's constitution to allow displays of the 10 Commandments on public property.

The amendment is expected to draw legal challenges for violating the First Amendment.

"Government-sponsored religious displays on public property clearly violate the core constitutional principle of religious freedom and put the seal of approval on one religion over another," Rachel Laser, president and CEO of Americans United for Separation of Church and State said in a statement. "And many of these displays will no doubt end up in court at the expense of the taxpayers."

U.S. News // 4 hours ago
Texas diocese fighting lawsuit from deacon on list of accused abusers
Jan. 17 (UPI) -- The Catholic Diocese of Lubbock, Texas, is fighting a defamation lawsuit from a former deacon who claims he was falsely labeled a child molester as the Roman Catholic Church grappled with a clergy sex abuse scandal.

U.S. News // 11 hours ago
Bomb cyclone whips Northwest with ferocious winds as it moves inland
Jan. 16 (UPI) -- A potent storm that barreled into the Northwest from the Pacific Ocean on Wednesday will continue to bring a dose of heavy snow and rain to the Pacific coast of the United States.

U.S. News // 11 hours ago
Gap abandons plan to spin off Old Navy into its own company
Jan. 16 (UPI) -- Clothing retailer Gap announced on Thursday that it no longer plans to spin off its Old Navy brand into a separate company. 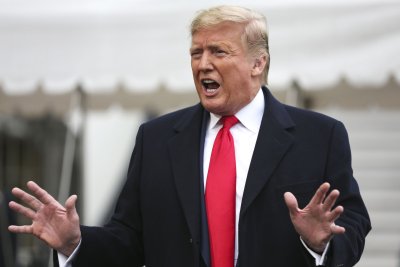