Oct. 29 (UPI) -- South Dakota executed a man who killed a correctional officer during a failed prison escape in 2011.

Rodney Berget, 56, was executed by lethal injection and pronounced dead at 7:37 p.m. after six years of court delays and a delay of more than five hours on Monday.

Berget was sentenced to death for killing Ron "R.J." Johnson while he had been serving a life sentence for an attempted murder and kidnapping conviction.

The other inmate who attempted to escape the prison, Eric Robert, was executed in 2012 after pleading guilty and Michael Nordman was sentenced to life in prison for providing the plastic wrap and pipe used in the killing.

Berget's execution was scheduled for 1:30 p.m., but was delayed as attorney Juliet Yackel appealed on the grounds Berget was intellectually disabled. Over the weekend Berget filed an affadavit saying he had told Yackel that he has "not authorized her to submit anything to the court on his behalf" and didn't want to contest the execution.

Berget began his final words at 7:29 p.m and began with a joke, witnesses said.

"Sorry for the delay," he said. "I got caught in traffic."

Johnson's wife, Lynette Johnson, thanked those who worked on the case while noting Berget was granted a more peaceful death than her husband.

"They broke his neck, they severed fingers, broke his wrists, he didn't have the back of his head ... that's cruel and unusual punishment," she said. "What Berget went through ... peaceful, clean, sterile, dignified."

U.S. News // 41 minutes ago
Parkland shooter changes pleas to guilty: 'I have to live with this every day'
Oct. 20 (UPI) -- Nikolas Cruz on Wednesday officially entered guilty pleas for killing 17 students and teachers at a Florida high school more than three years ago -- and will now let a jury decide if he will die for the crimes. 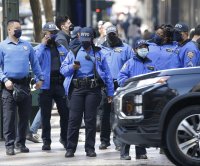 U.S. News // 9 hours ago
Lawsuit: Critical race theory ban in Okla. schools violates Constitution
Oct. 20 (UPI) -- A group of students and educators have filed a lawsuit against the state of Oklahoma, accusing it of violating their constitutional rights with a law that restricts the teaching of race and gender in classrooms.