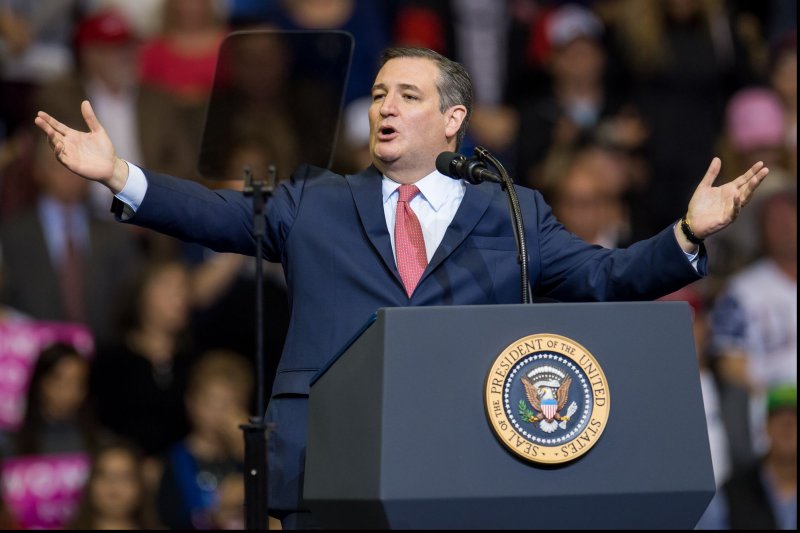 Sen. Ted Cruz speaks at a rally for his re-election campaign that was hosted by President Donald Trump in Houston on Monday. Photo by Trask Smith/UPI | License Photo

IRVING, Texas, Oct. 23 (UPI) -- One of the most divisive races in the midterm elections is Texas Republican Ted Cruz's fight to beat back a challenge for his Senate seat from Democratic Rep. Beto O'Rourke. The choice could not be starker.

Voters for whom national policy on immigration, healthcare and the economy hit home see it as a choice between supporting the agenda of President Donald Trump, who campaigned Monday night for Cruz -- or supporting Trump's impeachment, as O'Rourke does.

Cruz and the GOP accuse O'Rourke of being "too extreme" for Texas.

O'Rourke is pro-choice on abortion, wants to reform the U.S. immigration system and supports renewable energy and the #MeToo movement against sexual harassment.

"This is great if you're raising money in San Francisco," Cruz said at a debate with O'Rourke on Oct. 16 in San Antonio. "It's terrible if you want to gain support in Texas."

O'Rourke criticizes Cruz for siding with Trump on issues including immigration, healthcare and civil rights -- and for missing key Senate votes while he was running for president in 2015 and 2016.

"We need a senator who will work with the president where we can and stand up against him if we must," O'Rourke said at the debate. "If you have a special relationship with President Trump, where is the result?"

RELATED Texas Rep. Beto O'Rourke on migrant separations: 'This cannot be us'

Early voting started Monday in Texas. Recent polls, including the average by RealClear Politics, shows Cruz ahead by as much as 7 points.

Both were elected to Congress in 2012 -- O'Rourke, 46, served three terms in the U.S. House of Representatives for his native El Paso, while Cruz, 47, has represented Texas for one term in the Senate.

O'Rourke's campaign has raised $26.8 million -- recently setting a three-month record and more than twice as much as Cruz. Some of his biggest donors include the University of Texas, Google, J. Street, Exxon Mobil, Facebook, Amazon and American Airlines.

Texas hasn't elected a Democrat to the Senate in 30 years, but dissatisfaction with Trump has stoked hopes for a Blue Wave.

"History does not favor the incumbent party in these midterm elections," said Chris Putnam, a Cruz supporter who lives in Colleyville, a Republican stronghold near Fort Worth. "That's expected. The other party has had a really strong reaction to Trump and his policies."

"You can go up and down his policies and there's not an inch of daylight between O'Rourke and [former President Barack] Obama," Putnam said. "What we should be focused on is policy and not personality."

While there are many issues that affect Texans, Putnam believes many of them stem from illegal immigration, which strains resources for healthcare, college tuition programs and other social services in the state.

"There couldn't be a sharper contrast in those policies," Putnam said. "It's not clear at all what Beto's policy actually would be other than relaxing standards. You've got to take away incentives" for illegal immigrants.

Democrats who watched the Oct. 16 debate in Dallas said O'Rourke had a stronger showing than in an earlier debate.

"It's really refreshing to see any political figure call out lies, especially when we live in the culture of social media where you can share things that are lies without citing the truth," Johnson said.

She said the Texas economy isn't booming for everyone like Cruz said it is.

"It's not booming. If it were booming, we would all have healthcare and teachers would be paid a living wage," Johnson said. "The tax cuts for the rich have hurt Texas. It's hurt Americans in general."

O'Rourke's campaign has emphasized the importance of bipartisanship and he cited several examples, including working with Republican Sen. John Cornyn on a bill to increase manpower at ports of entry.

He was also awarded the Prize for Civility in Public Life by Allegheny College in July for his Facebook Live stream with U.S. Rep. Will Hurd, a Republican, as they traveled from San Antonio to Washington D.C.

O'Rourke has also called for Trump to be impeached, which Cruz highlighted more than once in the debate.

"You want to talk about a shutdown? With Congressman O'Rourke leading the way, [it will be] two years of a partisan circus and a witch hunt on the president," Cruz said.

Sam Goldmsith, who is torn between the two candidates, said impeachment is the nuclear option.

Goldsmith said he liked O'Rourke when he emerged on the scene earlier this year but has seen him move more to the left.

"Beto, in the last month and a half, has been influenced by national politics rather than by Texas," he said.

But Goldsmith, who grew up in a rural town, said he likes that O'Rourke visited all 254 counties in Texas.

"He actually talked to people rather than just talking to the big cities. He talked high-speed Internet in every single town in our state," Goldsmith said. "I grew up in a small town, so that's important to me."

Ryan Roskey, who majored in finance and economics in college, said Cruz's support of Trump's tariffs on China worries him.

"As soon as you screw somebody else over, you always end up screwing yourself over," Roskey said. "It hurts both parties. It's better to always cooperate and that always increasing your profits."

Natalie Genco, a Cruz supporter who lives in Colleyville, said a vote for Cruz is a vote to move forward. She cited the improved economy since the Trump tax cut, which Cruz approved.

"For the Texas economy, Cruz is going to be much better," Genco said. "Ted Cruz is dead-on with fiscal issues that make Texas better for everyone. I know Beto wants to increase taxes. It's been proven that increasing taxes puts brakes on the economy."

San Antonio resident Gigi Lehman has been volunteering for O'Rourke's campaign for almost a year. She's drawn to O'Rourke because he won't accept money from political action committees.

"The more I volunteer, the more I see the implications of that and how important it is," Lehman said. "There's not some big mega-donor PAC coming to the rescue. It's all just regular people. When a candidate sees how many people are giving up their normal lives and making a bunch of small donations, I feel like he's really going to listen to what I say."

She said she's hopeful an O'Rourke victory will inspire other non-politicians to run for office around the country:

"If he can win this race doing it the way he's doing it, then I think we'll have a whole different breed of candidate all over the country."

U.S. News // 9 hours ago
Officials close 2 Long Island beaches after unprecedented shark attack
July 3 (UPI) -- Officials in Long Island closed two beaches to swimming on Sunday after a lifeguard participating in a training exercise was attacked by a shark.

U.S. News // 22 hours ago
Gunman kills two civilians, injures three officers in Texas shootout
July 3 (UPI) -- A Texas gunman killed two people and injured a third Saturday before a shootout with law enforcement that left three police officers injured in Haltom, which is part of the Dallas-Fort Worth region