Google announced that it will shut down Google+ after finding a bug that exposed user information to third-party developers. Photo by lightpoet/Shutterstock/UPI

Oct. 9 (UPI) -- Google will be shutting down Google+ over a 10-month period after disclosing a glitch that allowed outside developers to access private information.

More than 500,000 Google+ users could have had their names, email addresses, occupation, gender and age compromised. Google+ posts, messages, phone numbers or G Suite data were not compromised, the company said.

The data was exposed to more than 400 third-party users.

"The consumer version of Google+ currently has low usage and engagement: 90 percent of Google+ user sessions are less than five seconds," Smith said.

Google plans to limit which Android apps are allowed to ask for permission to access text and call log data.

"The DPC was not aware of this issue and we not need to better understand the details of the breach, including the nature, impact and risk to individuals and we will be seeking information on these issues from Google," a spokesman said.

U.S. News // 50 minutes ago
Woman's body pulled form car floating in Niagara River
Dec. 8 (UPI) -- A woman's body was pulled from the Niagara River in New York after her vehicle fell into the water on Wednesday. 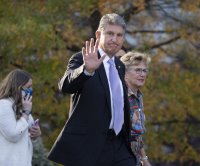 U.S. News // 5 hours ago
Job openings in U.S. rise to 11 million amid slight decline in those who quit
Dec. 8 (UPI) -- Employers nationwide had 11 million job openings during the month of October, nearly a record, and the number of Americans who quit their jobs that month dipped slightly -- but is still way above normal.

U.S. News // 6 hours ago
Roku reaches deal to keep YouTube after 8 months of dispute
Dec. 8 (UPI) -- Facing the prospect of losing YouTube from its popular streaming service, Roku announced Wednesday that the two companies have reached a deal to keep it there for at least a few years.
Advertisement