Sept. 11 (UPI) -- A federal judge has denied bail and issued a gag order for a female gun rights activist accused of spying for Russia against the United States.

U.S. District Judge Tanya Chutkan said Maria Butina, 29, who has been held in custody since mid-July, would continue to be detained because she's considered a serious flight risk.

The judge also warned Butina's lawyer, Robert Driscoll, that he'd "crossed the line" in media interviews and by giving a video of his client singing a Disney song to ABC News. The video showed her singing "Beauty and the Beast" with an American man she said is her boyfriend.

"I'm not sure what on Earth their relevance is to Ms. Butina's risk of flight," Chutkan told Driscoll.

"There comes a point where your work defending this client needs to happen in this courtroom and not on the public airwaves."

The judge also ordered prosecutors in the case to stop talking about it in public.

Last week, prosecutors said misinterpreted text messages led them at one point to mistakenly accuse Butina of offering to trade sex for political access. However, they have not stepped back from other claims.

The Justice Department announced in July that Butina, who'd lived in Washington, D.C., was charged with conspiracy to act as a Russian agent.

Prosecutors say she worked under the direction of a high-level Russian government official to develop relationships in the United States and infiltrate organizations with influence on U.S. politics.

U.S. News // 15 hours ago
Texas man involved in Jan. 6 riot charged with threatening AOC, police officer
Jan. 23 (UPI) -- The Department of Justice has revealed that a Texas man who allegedly participated in the Jan. 6 Capitol insurrection also posted online death threats against Rep. Alexandria Ocasio-Cortez (and a US Capitol officer.

U.S. News // 19 hours ago
National Guard to send 15,000 troops back home after Capitol duty
Jan. 23 (UPI) -- National Guard troops that had been stationed in Washington, D.C., since the Capitol riot are heading back home this week following orders from several governors for their return. 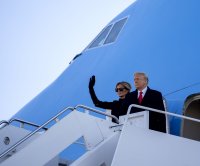 U.S. News // 22 hours ago
'Drought is going to take a good kick in the pants'
Jan. 23 (UPI) -- Forecasters say the drought in California and the southwestern United States is about to take a beating as one storm after another is expected to bring copious amounts of rain to coastal areas.